Howto:Add multi-key commands to an aircraft 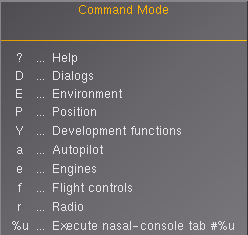 The on-screen help for the multi-key commands.

This tutorial will guide you through how to add multi-key commands to an aircraft and how they work.

The multi-key commands are vi-like key sequences that begin with : and is followed by other keys.

The multi-key commands are defined in a property-list xml file, named for example aircraft-multikey.xml.

The syntax builds up like a tree where the leaf nodes have bindings.

It is a very good idea to use the key name and a short but meaningful description as those are used by the multi-key command on-screen help dialog (when it is toggled on with :Tab ↹).

The bindings uses the same syntax as described in Bindings and Howto:Reassign keyboard keys#Adding or modifying key assignments.

Include the commands into the aircraft-set.xml file

Add this line to the aircraft-set.xml file:

Among the nasal files in $FGDATA/Nasal that are loaded when FlightGear starts is multikey.nas that will load a number of Nasal functions. The keyboard configuration file $FGDATA/keyboard.xml will call multikey.start() when the : key is used.

These are a good example of how one can do.