This article is about the GroundServices addon prototype for FlightGear. Unlike some existing ground services which are part of various aircraft, it is intended to be generic and not dependent on specific aircraft (though there will be dependencies from aircraft dimensions).

See also AI_Traffic#Ground_traffic_rendering for the modern approach to rendering ground traffic fast on both GPU and CPU.

It is written completely in Nasal and is derived/inspired from the existing AI subsystem and tanker.nas (except for the way vehicles are moving).[1]

After starting FlightGear, GroundServices goes to "standby" mode, monitoring the distance of the main aircraft to the next airport. When the distance is below 3 NM (main.minairportrange), GroundService switches to "active" mode. It reads the corresponding groundnet.xml and ground vehicles are launched as defined in AI/groundservices.xml.

initialcount vehicles (scaled by airport size) of each type will be launched at their defined home location and move between the configured destinations (random groundnet nodes are used if nothing is configured).

When the distance to the airport exceeds 3 NM, GroundServices switches back to "standby" mode, removing all ground vehicles.

The models included are

The GUI provides the options to

There are already existing ground service components in FG providing Pushback, FollowMe, Ramp Marshall and Jetways (maybe even more). Integrating these with the existing AI system appears straightforward. Routes for driving vehicles on the apron could be derived from groundnet.xml.[2] The Nasal approach of tanker.nas however looks more comprehensive. Reading groundnet.xml from Nasal apparently isn't possible yet without doing explicit XML parsing. Though the airportinfo function in nasal provides parking and taxiway information, these might be derived from different sources than groundnet.xml.

Having the groundnet.xml information available in Nasal in combination with the logic in tanker.nas might provide a simple way for having vehicles moving on the apron.[3]

GroundServices was developed and tested with FlightGear 2016.4.3, 2017.3.1 and EDDKs, EHAMs, EGLLs and EDDFs groundnet. As of release 0.3.0 it is a FlightGear addon and so requires at least FlightGear version 2017.3. There are no further known special requirements and it should also work with later FlightGear versions and airports that have a groundnet defined.

The solution is based on the airports groundnet.xml. So for now you just have to make sure that your airports groundnet.xml is reasonable, meaning parking positions are at correct location and all connected to taxiways. Look at [1] https://github.com/thomass171/GroundServices/releases for releases.[4]

GroundServices currently moves ground vehicles along an airports taxiways and provides simple catering and fueling services. Its just a prototype and still might contain bugs. There is a risk of null/nil pointer incidents. Indicator for this is when all vehicles stop moving.

The catering and fueling services are composed of a catering vehicle approaching an aircraft right front door and a fuel truck approaching the left wing. The approach destinations are calculated from the aircraft position and a defined door and wing position of the aircraft. Currently the implementation only uses a rough approximation of these positions, because there seem to be only a few aircraft models out there that have door positions defined.[5]

Furthermore, there seems to be no way to get information about an AI aircraft model from the property tree currently. However, jetways.nas seems to find the door positions even for AI aircrafts (issue added to roadmap).

The addon is available here. It is recommended to use the latest release 0.5.0 and install the addon from the zip archive.

The addon is installed just like any other addon as described in Addon. No manual steps are needed any more.

A video of the installation and running can be found here:

After starting FG with the aircraft located on an airport that has a groundnet defined (I propose using ufo on EDDK for a first attempt) the vehicles will start moving from their home point immediately. In EDDK vehicles will move near the main terminal and should be easily visible. EHAM, EDDF and EGLL are considerably larger and have no home configured. In EHAM vehicles will start from cargo position R, which is in the south west of the airport. Move ufo near there (by PHI; thats very easy) for seeing the vehicles.

If any problems occur, check FGs logfiles for nasal errors. In addition a logfile FG_HOME/groundservices.log is written by GroundService and can be checked for errors.

For having some nearby activity, two 737 models (Air Canada and Air France) will be launched after initialization (config parameter delayfornearbyaircraft). These will move to some non occupied neighbor position of the current aircraft and receive servicing.

Its not easy to detect the current position of ground vehicles. Seeing them from your current view point is mere chance. 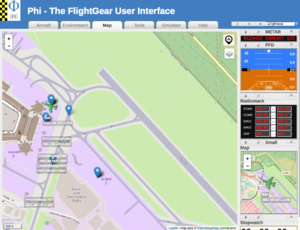 An option for monitoring vehicles is the map of Phi. This however requires two patches to the file Phi/topics/Map/AILayer.js in FG_ROOT. Near line 81 the type gsvehicle needs to added:

and near line 139 these models need to be considered:

Don't forget the closing curly brace a few lines beneath (not displayed here). Reload Phi in your browser and choose "Other Traffic" in the layer selection menu. 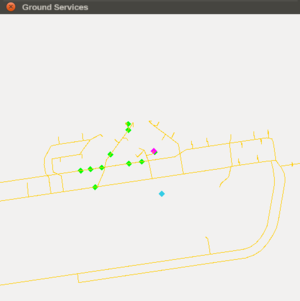 The map is opened by clicking the "Map" menu item in the Ground Services menu. It uses the following colored indicators for vehicles:

The addon Model Cockpit View lets cycle the view point through all AI cockpits. For using it with ground service vehicles, the phrase gsvehicle needs to be added manually to the code (main.nas):

By default, the view point will be at (0,0,0), so the view point from a ground vehicle will be exactly on the ground below the vehicle. Though this might be useful for analysis purposes, a raised view point is more interesting. See Model Cockpit View on how to change the view point.

The main configuration file is AI/groundservices.xml. When no home position is defined for an airport, the first (or last) parking node will be used as home.

Uninstallation is done by just deleting the addons directory and removing it from the addons option from the command line.

The groundnet information is stored in a graph data structure.

For simplification, the coordinates are projected to a 2D xy coordinate system, where all calculations are executed (The projection currently is a too simple linear projection).

Moving of vehicles is implemented by first finding a path along the graph (Graph.findPath()), which is quite simple due to Edsger Dijkstras preliminary work. The vehicles will move along their defined path like a train on rails. They will allways be fixed at some specific position on some edge (class GraphPosition).

For accomplishing a smooth transition from one edge to the other, the graph not only allows line edges but also arc edges. So the shortest path found through the graph will be smoothed (GraphUtils.createPathFromGraphPosition() and GraphUtils.createTransition()) by truncating line edges and connecting these by arc edges. These graph edges will be added temporarily to the graph and will be removed from the graph when the vehicle reaches its destination.

Smoothing the graph path is a quite complex process with many potential combinations (eg. short edges, small angles between edges, orientation of vehicles). Optimizing this process still is a work in progress.

The list of possible improvements is endless. The following are some of the ideas (without any order):

A followme vehicle on its way at EHAM. 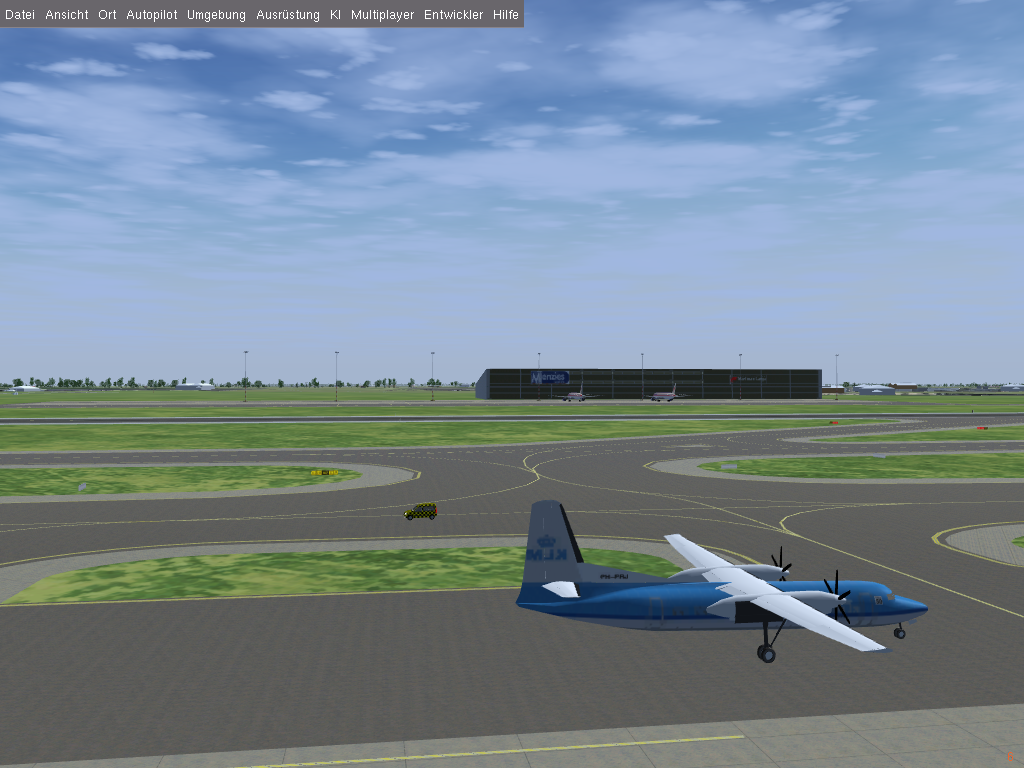