This is a short tutorial to show how to add glass reflection effect to instruments, using graphic tools, so that the reflection effect is already contained in the main instrument image, and not depending on shaders. The result is widely satisfactory and very realistic one, meaning a less CPU load.

You may use any image editing software, but would be useful one with multi-layer support (as GIMP or Photoshop), so you may control each step as a separate layer, adding or subtracting effects one by one.

The final resulting image is this: 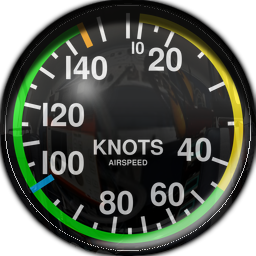 If needed, add a final parallel sorrounding shadow to the main image. It helps to better see it positioned over the panels and not look so fake.