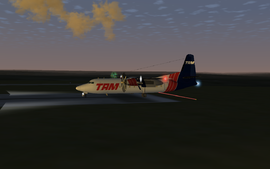 A Fokker 27 in the TAM livery.

The Fokker 27 is a 2 turboprop airliner.

Design of the Fokker F27 started in the 1950s as a replacement to the successful Douglas DC-3 airliner. The manufacturer evaluated a number of different configurations before finally deciding on a high-wing twin Rolls-Royce Dart engine layout with a pressurised cabin for 28 passengers. The first prototype, registered PH-NIV, first flew on November 24, 1955. The second prototype and initial production machines were 0.9 m (3 ft) longer, addressing the first aircraft's slightly tail-heavy handling and also providing space for four more passengers, bringing the total to 32. These aircraft also used the more powerful Dart Mk 528 engine. The Fokker F27 for Flightgear is based on Erik Hofman´s Fokker 50.