FlightGear versions later than 2.8 include a new feature to make HTTP requests using a new xmlhttprequest fgcommand. Nasal is able to execute these so called "fgcommands", which are internal FlightGear commands implemented in C++ This can be used to implement AJAX-like server/client exchanges.

You can pass any FlightGear property tree data (lat,lon,alt,groundspeed etc) via conventional GET requests to the server side script.

The request will be made asynchronously, in order not to block the main loop or affect the frame rate. This is why you should register a listener to invoke a callback upon completion of the request and check the status flag (200=OK).

Since mid-summer, forum user "Icecode GL" has been working on a free and open-source stand-alone ATC client written in C++, totally from scratch with the help of the GTKmm GUI toolkit (http://www.gtkmm.org/en/) and the Cairo 2D graphics library (http://www.cairographics.org/). He has started this as a project to learn from and take some practice while developing it at the same time, as well as satisfying his needs of a complete and more professional ATC client for FlightGear.

If someone wants to join the project, give ideas, requests or opinions, feel free to do so. The repository is here: https://gitorious.org/fgradar/fgradar?p=fgradar:fgradar.git;a=summary

Flightgear On Android's effort on taking FlightGear to Android is a great project and another step making FG the most wide spread sophisticated simulation around. But there's another project connecting FG to Android: the V06 Cockpit Panel by DerFalkner.

It is a network based panel for any (flight)simulator that is able to send its data via UDP. So far it has a basic primary flight display with an artificial horizont, an airspeed strip and an altimeter. More work / features will be added, so it might end up to be a fully integratable flight management system with gauges, multifunctional displays, route planning, moving map and all the other fancy stuff you find in modern cockpits. Have a peek on YouTube or check out the app via the Google Play store by searching for V06. 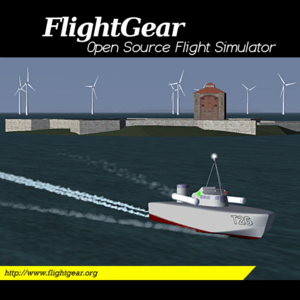 Not an aircraft but FlightGear can do boats as well. These fast boats were in service from 1942 to about 1955. A preview is available in Anders' hangar at gitorious.

The Buccaneer S2 has been updated to comply with Project Rembrandt standards. Thanks to Alan Teeder it has acquired a HUD: the Buccaneer had what is believed to be the first HUD in service. It is implemented with Canvas, however, there are some additional features yet to be implemented.

With the assistance of Emilian Huminiuc and some nifty work in Blender we have been able to add some more eye-candy in the form of pilot and observer animations, but you will have to look really closely to spot them though.

Some additional instruments have been added, but much remains to be modelled. The status has been updated to Beta.

A big "thank you" to all painters!

The upload form has been extended with several functionalities, the most important ones being: