In line with the release plan, the FlightGear repositories are frozen as of June 17. In this "frozen" state, no new features or major changes shall be pushed onto the development streams (neither source nor data). This period is for preparing the code for the release and make sure there are no major issues. It lasts for four weeks until creation of the release branches on July 17.

SimGear 2.11+ now has experimental support for a webDAV based libsvn replacement, people building from source are encouraged to help with testing and debugging this new feature:

If you've always been wanting to look into HLA a bit more and maybe even start developing HLA based apps that use OpenRTI, you may want to check out the new tutorial titled Developing with HLA. This is currently work-in-progress and will evolve slowly. The motivation is that the original HLA article only really discusses the overall picture and lists some general HLA tutorials - it doesn't go into FG specifics like OpenRTI or HLA support in SimGear, which we however need to cover to get more people up to scratch with HLA, i.e. 1) building SG/FG with HLA and 2) actually developing with it to partition FG into separate processes.

A long time ago, we once had a FG-specific benchmark suite called "FGBenchmark" - meanwhile, a number of end-users and long-term contributors have been talking about re-introducing a form of scriptable benchmark, directly as part of FlightGear itself, using Nasal scripting to recreate certain situations (location, aircraft, rendering settings) in order to gather runtime statistics, but also for better regression testing. Meanwhile, FlightGear has drastically evolved since the early days of FGBenchmark, so that many of these things can now be accomplished, even without touching the C++ source code. Which is why we have started collecting community feedback on benchmarking FlightGear, discussing possible approaches.

The OpenRadar project provides an ATC radar interface for FlightGear. Over the past few months it is steadily becoming one of the most used ATC applications. Under development by Ralf Gerlich and Wolfram Wagner among others "all-stars" code contributors, this java application will make you became an ATC-Controller all around the FG's MP network.

Be sure you have FGCOM installed in order to use it like real ATC does.

In general terms we can say that OpenRadar is solid - fast - multiplatform - open source - well programmed application, but best of all it is fun. Without doubts you must try it.

From here we would like to say thanks for the big effort done behind OpenRadar.

OS-RC is a revolutionary Radio "Transmitter" control system based on GNU/Linux. Created by Demetris Zavorotnitsienko, a young and brave electronic expert from Cyprus who has created several open source hardware-software high value projects. OS-RC is a big idea that has change the way to fly RC-FPV. In fact this system has change the way in what FlightGear currently can be used with those (now) obsoletes flight systems, opening a new world of possibilities and giving a broader space where FG can interacts inside UAV-FPV-Drones segment.

On a gently and productive short conversation with Demetris, he has expressed a lot of interest in our project. Nowadays he is working very hard on hardware in order to finish a "final product" that because of a lack of budget he had first to create the 3d-printer project which to build then the OS-RC.

Linux inside, this new system has changed the way we fly, bringing us even a broader new FGecosystem for FlightGear. 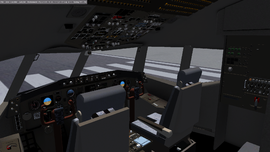 Jormapaappa1235 has been working on a new Boeing 757-200 with fully modeled interior. The plane has now almost finished cabin and pretty detailed cockpit. Sadly the systems are not as finished as the model, so everybody who is interested in any kinds of systems and wants to help, please contact jormapaappa1235 in the forum topic

The new 757 can be obtained through git but there is no official support yet.

Warning: The plane is much heavier than the average FlightGear plane, mainly because of a fully-modeled cabin. It is therefore not recommended for low-end computers.

For this training flight you'll have to take a Boeing 737 and perform a VOR DME Approach Procedure for the RWY 23R at Manchester airport. Repeat practice if you need and enjoy. Some info:

See the following video of a Manchester 23R VOR/DME APP in a full motion simulator. It's not much different in FlightGear.

The FlightGear Community Pages will be pulled offline in August. Its maintainer does not have enough spare time to take care of the website and co no longer provide hosting for it. Please save all your important data (think of screenshots, statistics...), before it is gone.

If you want to fly her or simply check the state of development, see this forum topic