The monthly newsletter can not live without the contributions of FlightGear users and developers. Everyone with a wiki account (free to register) can edit the newsletter. If you know about any FlightGear related news or projects such as for example updated scenery or aircraft, please feel invited to add to the newsletter. 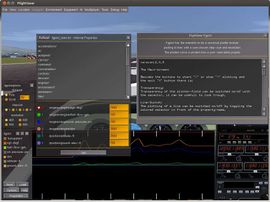 With some help from TheTom, fellow FlightGear contributor kuifje09 has now finished porting his original FGPlot C code to use Nasal scripting and the new Canvas system built into FlightGear, this means that now all FlightGear users can easily use FGPlot for plotting FlightGear properties, regardless of their platform or OS of choice. FGPlot will be particularly useful to aircraft developers, i.e. for tuning FDMs and/or autopilots.

While FGPlot looks and feels to FlightGear just like a conventional GUI dialog, under the hood, it is certainly is more than that, because it is basically our first real "application" built inside FlightGear, with FlightGear being its runtime environment, all built on top of Nasal scripting and the scriptable Canvas 2D rendering API.

This is an interesting, novel and extremely powerful approach, because it shifts development of user-space applications to the realms of the base package. With GUI dialogs being stricly user-space and non-critical to the FlightGear core, this approach also means that such Nasal/Canvas-driven applications don't need to be subjected to feature freeze regulations or core developer revies to be accepted for inclusion into FlightGear, so that FGPlot and similar applications can be easily maintained and developed even during the code freeze, even by people who don't need to be core developers or have commit access, so that FGPlot may even become available in the soon upcoming 2.12 release. 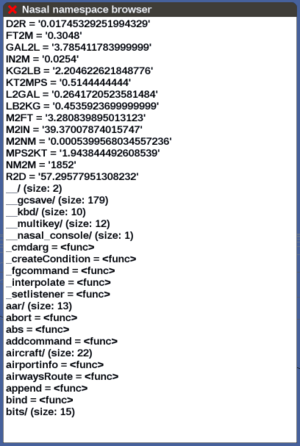 Philosopher created a GUI browser for viewing the Nasal state (Nasal being our built-in,JavaScript-like, FlightGear scripting language). It's sorta like the property browser, except in Canvas, and still a basic prototype, but already pretty useful for debugging purposes. Tested on 2.10, 2.11 and 2.12.

To use, place the file in Nasal/nasal_browser.nas and (preferably) add an entry to the menubar (the name tag should be "Toggle Nasal Browser" or similar, for quick testing just use the built-in Nasal Console to run the code, the Nasal code for the menubar binding or the Nasal console is:

Macnab has started writing a detailed tutorial which explains how to use Nasal scripting to implement custom Joystick functions, including Accurate control of button repeat rate.

It has been almost five years since the Tupolev Tu-154B-2 made its first appearence in FlightGear. Now, after years of development and bug-fixing, release 3.0 is available. The most important news is that it is GPL compliant and Rembrandt ready!

Unfortunately, many FlightGear pilots do not even know this airplane exists. The reason is, the Tu-154B-2 is a converted version of Project Tupolev's Tu-154 originally created for Microsoft Flight Simulator. It was incompatible with the GNU General Public License and thus not available for download on the FlightGear website. Till now. 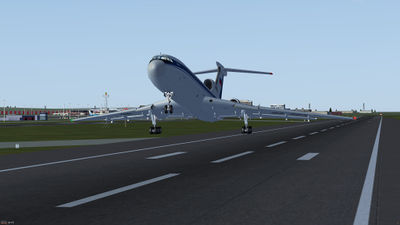 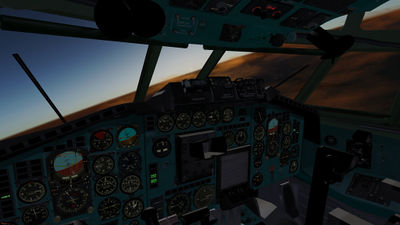 We have now been allowed by Project Tupolev to distribute Tu-154B-2 under GNU/GPL. In addition, the model has undergone major overhaul regarding the Rembrandt project. It now provides a full specter of real lighting, for both exterior model and the cockpit.

The Tupolev Tu-154B-2 is one of the most sophisticated and beautiful airplanes in FlightGear. Hardly any other aircraft combines that much beauty of design and such a high degree of systems realization. With its flight dynamics based on a real Tu-154, it handles in the air like a real aircraft of its kind. However, due to its complexity, it might be not a suitable airplane for beginners.

For download links and more information, see Tupolev Tu-154B. The aircraft will be available from the official download page after the upcoming release. 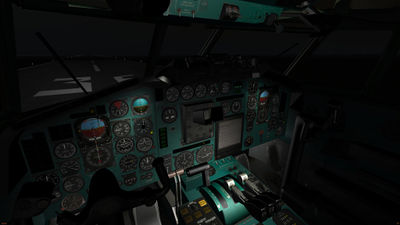 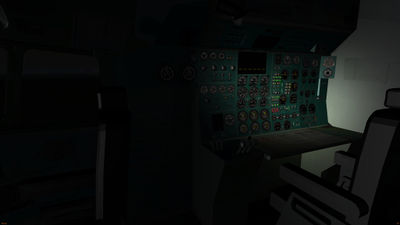 The two Edwardian era planes that I'm making for FlightGear this month are: The AV Roe type IV triplane from 1910 and : Tony Fokker's Spin from 1911. The AVRO IV model started out as the Type I Avroplane I made originally for Flying Model Simulator. The AVRO type I prototype it's based on was first 'flown' in 1909, and because it's first flights were actually more of a series of long hops there is some controversy over whether they were actual flights. The AVRO Triplane types II, III, and IV were powered by larger engines and were more proven flyers. The Shuttleworth Museum has a flying replica of the AVRO type IV, originally made for the movie, Those Magnificent Men in their Flying Machines. The Fokker 3D file started life as a FS2004 model made by Dutch 3D artist Rien Corneilissen, who made the Spin as a FS2004 model to be used at a Haarlem, the Netherlands, centennial event celebrating this famous flight made by Tony Fokker around Haarlem in 1911. Rein made this Microsoft Flightsim model for the public to try as a simulation at a church/nuseum in Haarlem. The Spin 3D file was altered as much as I could do without actually changing the spirit of Rien's fine old MSFS model. It did need a new engine model file and some better textures.

Both aircraft are using YASim FDM's with some extra features in the flight models, not often used in YASim, that refines their flight envelope and control behavior.

I have two video's up on YouTube of both these aircraft, if you want to see them in more depth. 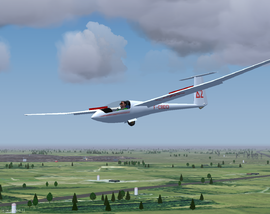 The 15m flapped sailplane ASW-20 was converted from UIUC to JSBSim and considerably further developed. Focus was on the FDM.

The original flight manual, speed polars and other valuable data of the ASW-20 is publicly available on the internet. A lot of this data is incorporated into the model (performance and handling). For the next development steps, fine tuning, the feedback of real life ASW-20 pilots is necessary.

To give an example: In the flight manual you'll find this passage: "Even in stalled flight attitude (the vario will read 1,5 to 2 m/s sink in calm air, that is 300 to 400 feet per min.) ailerons and rudder work in the usual manner, as long as only half control deflections are applied. Full control deflections result in light wing dropping, whereas full deflected controls in opposite directions with stick pulled completely back will cause rapid wing dropping."

Unlike the previous version, this one has eliminated visual bugs and was built using the new toolchain which supports directional road and railway textures.

It includes all terrain between 20-30 East and 40-50 degrees North, while missing parts from the previous versions like Turkey are now covered. Greece has no Corine coverage, the rest of the terrain is based on OSM, Corine and SRTM. It is recommended to use the custom texture pack from the texture project page and to start the simulator with the included custom materials file for the best visual experience.

The world tour is getting ready to recommence its fun travelling accross the globe. Briefly, vATO's welcome every Flightgear enthusiast to join this multiplayer game and competition. The goal is to visit every capital city of the world, by flying routes that connect two of these capitals on every route via pre-established segments. Every segment within a route has to be flown at least once by ANY competitor, which causes the following segment to be "unlocked". Unlocked segments are then allowed to be flown by ANY competitor progressing therefore throughout the connections. No player/competitor is forced to fly any or all routes, so everyone will fly those routes appealing. Furthermore, while a Route is active, unlocked segments can be flown as many times as desired to accumulate more points within the competition. Segments, once unlocked, can be flown in reverse as well.

More info in the forum topic

Virtual Air Canada is a new virtual airline based in Canada. It is part of the Virtual Air Canada/ACJZA Hanger that will be making some aircraft this year. Visit the website at virtualaircanada.x10.mx/