Due to real life constraints and the low number of active core developers, we've hit a fluctuation where pretty much everyone is occupied with something else at the moment. As a result of that, no release candidates have been released until after the original release date. In order to provide a stable and (mostly) bug free release, publishing release candidates and running the associated tests and bug fixes is essential. Therefore it was decided to postpone the upcoming FlightGear 2.12 release by at least a month. This will provide sufficient time to distribute the release candidates and process end-user feedback.

Thanks to recent work done by James Turner, we now have automatically generated installers / files for FlightGear releases. Currently the following operating systems are covered:

By testing the latest builds, you can help the realisation of a stable 2.12 release for everyone. Please file bugs in the bug tracker. The server can handle plenty of people downloading (unlike Jenkins itself).

Get a release candidate from: http://fgfs.goneabitbursar.com/releases/ (files are updated automatically)

TerraSync: A Call for Help

FlightGear's realtime voice communication system FGCom has been integrated into FlightGear this month. The feature requires a lot of testing and everyone using the development version of FlightGear is invited to communicate every bug found. A new server has been created (fgcom.flightgear.org) that is designed for testing up to FlightGear 3.0. More information and documentation can be found in Integrating FGCom. 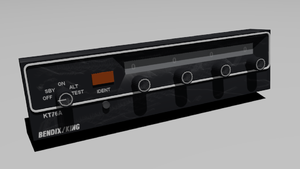 Recently transponder over network has been implemented bringing more realism during ATC session. A new transponder, the Bendix King KT76A, has been added to the shared Aircraft/Instruments-3d folder with the following features:

See the dedicated article for instructions on how to use the transponder, or how to implement it in an aircraft. Among others, there is a new livery by Frank Göldner for the DC-3/C-47 operated from October 1970 until November 1972 for the British Kestrel Airways. Download it from the FlightGear Livery Database also check the forum thread of DC-3/C-47 liveries

where there are a lot of new entries.