The last one can be: 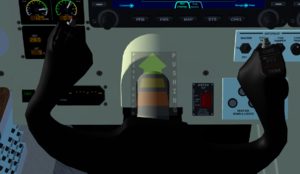 The direct elevator control mode is what you will find on most Flightgear aircraft: your control input is directly translated to an elevator position. This will give you a relative accurate position of the elevator (and yoke) dependent on aircraft weight, configuration, centre of gravity and airspeed. Of course you will not be able to feel the force acting on the pilot. As the function of trim is to reduce the pilot force to zero, on most models trimming is completely useless. Therefore the Extra500 model features a panel which will indicate the direction and magnitude the pilot has to act on the yoke to keep the yoke where it is. Giving you a realistic idea where to trim too. The trim panel can be toggled on/off in the Extra500 - configuration dialog. 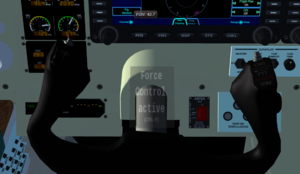 Therefore the Extra500 model features a second pitch control mode. It controls the pilot force, not the yoke position. So when your joystick is centered, no pilot force is acting on the yoke (as if you would have let go). Moving the joystick forward is pushing, backwards is pulling. You can use the elevator trim to reduce the force needed and thus get into a stable flight attitude with your joystick centered. The elevator (and yoke) position is calculated by the elevator hinge moment model.

You can toggle between the above control modes by pressing CTRL+f. Make sure you are trimmed out when changing mode from 'direct' to 'force' mode or you will be pitching up or down like hell.