The second most important system in any motor powered aircraft is the propulsion system. In case of the Extra 500 there is one engine and supporting systems (fuel, ignition). The engine used is a RR250-B17F/2 with a take-off power rating of 450SHP. Like most single engined aircraft, the engine is mounted in the front. This particular engine is a twin shaft turboprop engine, meaning there is a turbine driving a propeller. The engine is a derivative from a RR250C20 helicopter engine. This brings a number of advantages: It is light (less then 100kg) and compact. A disadvantage is loses power with altitude as one runs into the TOT limit pretty fast.

The engine has no FADEC, meaning it is controlled not by software, but in this case, by a sophisticated pneumatic control system. This means there are very little and relatively simple supporting systems: 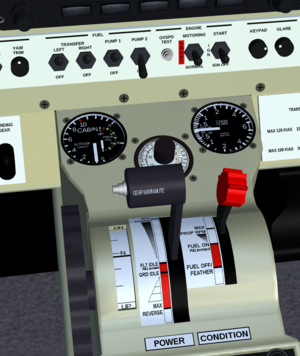 In addition you will need: 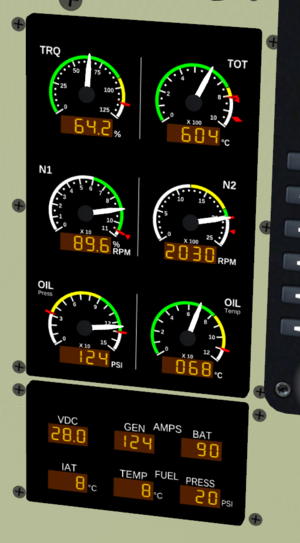 The main engine indicator is located on the left side of the panel. It indicates 6 parameters:

Below this indicator an other instrument shows parameters in digital format only:

Beside the RH IFD more fuel system parameter are displayed: 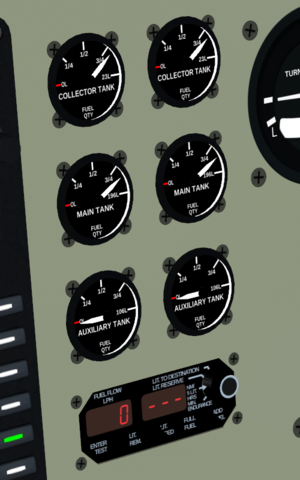 A short note on above parameters:

As all aircraft engines, this aircraft has limits. There are two parameters whose limits must be actively monitored and kept by the pilot:

There are three things that are essential for a good engine start:

Zoom so you can see the engine instruments, the start switch and the condition lever. There won't be time to move your head around. Toggle the Start switch to START (mouse wheel up) the switch will fall back in IGNITION, so no need to worry about that. At 12-15% N1: Press s ( or click on condition lever, its the red one ) to add fuel. Monitor TOT and abort the start if necessary. Monitor you get a positive oil pressure. No oil pressure will kill any turbine engine in 15 seconds.

In case of a hot start: cut off the fuel using the condition lever and switch off the electric starter by moving the motoring switch in ABORT.

Typically one fuel pump is on, although the engine will start without it. Only at high altitude the engine won't start or even flame-out when none of the pumps are on.

Once the engine is started you can use the power lever to increase or decrease power. As mentioned before, make sure you stay within the TRQ and TOT limit. As the air is thinner in higher altitude, less air will go through the engine and thus the TOT will rise. Therefore, the TOT will go up while climbing without you ever touching the power lever. For fine tuning of the power, you can hover your mouse above the power lever handle and turn the mouse wheel. Use the n/N to increase/decrease propeller RPM. Note that when standing still and in low power, the propeller is at its fine pitch stop and RPM still below the propeller governor setting.

Reverse may only be used on the ground, so practically at the landing roll to reduce its length. In normal operation, the Power Lever travel ranges from Flight Idle to Maximum Power. Only when in Flight Idle you can pull the Power lever up (Press r) and increase power. You will see the power lever moves further back in the so-called beta range. This means that not the propeller governor is in control of the propeller blade angle, but it is linked directly to the power lever. Moving the lever back a bit will set it into Ground Idle, moving it further will turn the propeller blades in such a way a reverse thrust is produced. To move back to the normal operating range decrease power (lever moves forward) to the stop and Press r.
Watch your oil temperature when in reverse. Normally the propeller airflow will force-cool the oil cooler, but in reverse this does not happen as the airflow induced by the propeller is reversed.

Motoring is basically turning the engine with the starter only. So no ignition, no fuel. It is used to cool down the engine or in maintenance after the fuel or oil system has been serviced. To motor move the motoring switch into MOTORING. The engine will run up to ~20% N1. Careful as motoring will drain the battery significantly, using external power is advised.

As mentioned before, the engine is controlled by a pneumatic system. There are several layers of control. The first one controls fuel flow. Then there is a system that makes sure maximum speeds are not exceeded. And this system has a back-up system. Now this back-up system normally is not needed, meaning that it could fail without the pilot noticing. Therefore it is tested using the overspeed test button.