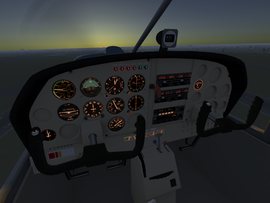 A cockpit is the area usually nearer the front of a piloted aircraft from which a pilot controls the aircraft. The cockpit is also commonly referred to as the flight deck (Boeing uses this term for example) although that term can also refer to the flight deck on an aircraft carrier. Most modern cockpits are fully enclosed, except on some small aircraft, and cockpits on large airliners are also physically separated from the cabin.

Traditional Steam gauge cockpits are definitely more modeling than "programming". But in general most people build their cockpits out based what functionality they want to implement next. So you may need a switch to turn something on and off.

In that case the modeling part is almost non-existent since you will likely look at other aircraft and "steal" a switch model that looks like the switches your aircraft uses. By the way we encourage that kind of "stealing" here.

So the "modeling" is done in a matter of minutes although you still need to do things like texturing the panel to create labels for the switch and positioning the switch. But then you need to setup properties in the property tree, set up animation for the switch and then hook the device controlled by the switch up to the property tree, make the device function and so on. So the "programming" part will dominate for this type of thing. Also for some things the animation code can become fairly complex and there's one device in the P-51D cockpit that has over 500 lines of Nasal and XML just for animation. But most things only need a few lines of XML.

For an aircraft specific control like a retract lever or fuel tank selector it is highly unlikely that you will be able to "steal" one from an existing aircraft and you will need to spend the time to model one.

But the "programming" effort will be about the same as the switch in the previous example. So the modeling effort will dominate. You will also need to create some custom steam gauges and it is typical to need at least an aircraft specific air speed gauge and an engine cluster that are specific to the aircraft. For these find some other gauge that is close and create a new texture for the face and tweak on the animation code and you are done. Still the texture work for these gauges can take some time and effort. For a lot of your gauges you should be able to find one either in Aircraft/Instruments3d or in an existing aircraft that you can use with minimal modification.

What really takes time here is that there is so many little details that make up the cockpit. Dozens of switches, a bunch of steam gauges, radios, various controls... and each one takes time to model, position, animate and hook into the systems they control. And on top of that to really do this right you need to model things like the inside structure of the cabin, the seats, rudder pedals, yoke/stick, the panel, the panel shroud and so on. In other words there is just lots of stuff that needs to be done to make a really nice cockpit and because the pilot is sitting right in the middle of all of it and is fairly close to everything it needs to be well done to not look like crap.