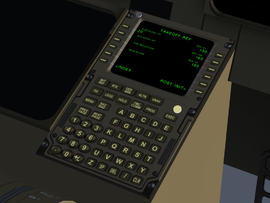 The Control Display Unit (CDU) is the interface device unit used to access the Flight Management Computers (FMC), the main computers and software of larger aircraft. CDUs are mostly seen on airliners, like the Boeing 777.

Currently there are several aircraft equipped with (basic) operational CDUs in FlightGear:

Gijs is working on a generic Boeing style CDU, as seen on the 747, 777 and lots of other Boeing airliners. The unit is supposed to be shared between multiple aircraft. And will live inside the Aircraft/Instruments-3d/cdu directory.

The latest version can be seen on the Boeing 747-400 in Git. See Howto: Implement a Control Display Unit for a tutorial on how to add this instrument to an aircraft.

As of 01/2013, a new CDU framework is being worked on by James, based on a combination of C++ and Nasal code, for further details please check out FlightGear Newsletter January 2013#Canvas-based CDU development.