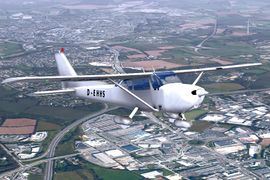 Located in a sheltered position not far from the western tip of the Breton peninsula, Brest is an important seaport and naval base. The 1999 census recorded 303,484 inhabitants of the Brest metropolitan area, while the population of the city itself was 139 342, according to the 2016 census. Although Brest is by far the largest city in Finistère, the préfecture (capital) of the department is the much smaller commune of Quimper while Brest maintains some administrative responsabilities as a sous-préfecture.

Brest is best-known for its Pont de Recouvrance (a massive drawbridge 64 m/210ft high), the military arsenal and the Rue de Siam (Siam Street). The Castle and the Tour Tanguy are the oldest monuments of Brest.

The city is near strategic military installations such as l'Ile Longue (Long Island), an active nuclear submarine base. However with the retirement of DCNS naval buildings, military presence is declining.