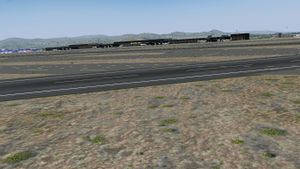 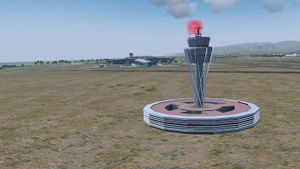 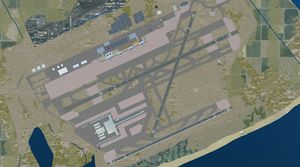 Barcelona–El Prat Airport (IATA: BCN, ICAO: LEBL), simply known as Barcelona Airport, is an international airport located 12 km (7.5 mi) southwest of the centre of Barcelona, Spain, lying in the municipalities of El Prat de Llobregat, Viladecans, and Sant Boi. In FlightGear, the airport as well as the city is well-developed with a range of custom scenery building models.

In 2016, as part of the FlightGear Versioning Scheme based on Airports, it was voted to be the default airport for FlightGear 2016.2.

The airport of Barcelona has two terminals; the latest (Terminal 1) was opened in 2009. Terminal 2 is divided into three connected sections. Both terminals serve international and domestic flights.

Feel free to add your own screenshots of Barcelona!

Majorca or Mallorca is a beautiful island to the south-south-east of Barcelona, in the Mediterranean sea. It is situated between Minorca and Ibiza, which, along with Mallorca, form the Balearic Islands. While the southern part is rather flat and boring, the north-western part has a great mountainous scenery with mountains up to 1445 meters (Puig Major). Take your favourite mid-class airliner like the A320(neo)-family, the 737-series or the E-Jet-Family. Start at Barcelona and taxi to the preferred runway. When at a safe altitude, turn to 164° and head directly to Mallorca while climbing to the cruise altitude. If the wind is coming from the right direction, you have the luck to get the approach from the north-east to runway 24 and you can see the great mountains on your right while landing. If not, well, then you'll see them while departing ;)

You know another good flight around LEBL? Write it into this article!