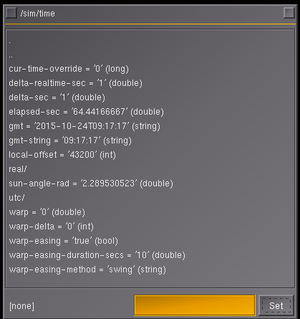 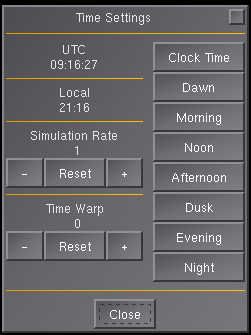 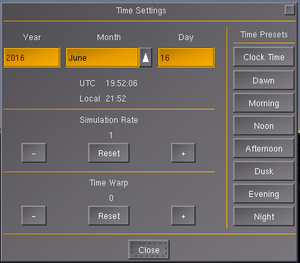 approximation of the FlightGear Time dialog via pui2canvas parser

The time in FlightGear and the properties affecting it are represented internally as properties in the /sim/time/ property subtree. The time can be manipulated using simulation rate/speed-up, to increase or decrease the speed of the simulation, and time warp/warp delta, to speed up or reverse local and UTC time.

When the simulation is sped up and slowed down, the integer factor /sim/speed-up will increase and decrease. The aircraft will appear to fly /sim/speed-up times faster over the terrain. When running FlightGear at normal simulation rate /sim/speed-up is one.

This will only affect the speed of the simulation, not the local and UTC time.

This will only affect the local and UTC time, not the speed of the simulation. The aircraft will fly just as fast over the terrain, but the sun and clock hands will speed up or reverse.

As of October 2015 there is only one floating point property, /sim/time/elapsed-sec, which tells how long FlightGear has been running. This property is not affected by simulation rate or time warp. Most of the other properties are integers, thus only able to show full seconds.

Getting sub-second local and UTC time

Sometimes you could want sub-second precision time that is affected by time warp. This could for example be if you want a cockpit clock to have a sweeping second hand or if you are logging test data in smaller intervals than one second while wanting those times to correlate to other data.

As clock hands often only use elapsed seconds to animate the hands, the following example will produce two such properties.

One way to get sub-second precision UTC and local time could be by declaring two floating point properties and a property rule in the aircraft-set.xml file for example like below. Using property rules will update the values at frame rate, while using autopilot functions would update them at FDM rate.