The Submarine Scout was a fairly small blimp, i.e. non-rigid airship, which was used for maritime patrol and convoy escort by the Royal Naval Air Service (RNAS) during World War I. The type first flew in 1915 and was in service throughout the rest of the war. The early versions had cars made from slightly modified aeroplane fuselages; the final version, Submarine Scout Zero represented here, had a purpose built car.

In the real aircraft the pilot had rudder pedals for the rudder and an elevator wheel located in front of him (with its axis across the cockpit) for the elevators.

This type of blimp normally operates from about 100 lbs heavy to a few 100 lbs light.

The fore and aft ballonets (air-filled bags inside the envelope) serve two purposes: (i) by inflating/deflating they maintain the pressure differential and volume of the envelope when the gas changes volume (mainly due to altitude changes); and (ii) the trim of the airship can be changed by the relative inflation of the ballonets. While the required envelope pressure dictate the total volume of the ballonets the airship can be trimmed by having one ballonet more or less inflated than the other.

The ballonets are inflated by air from the propeller slip stream, collected with the scoop and passed via fabric trunks and closeable no-return valves to the ballonets. The ballonet relief valve automatically open when the pressure in the ballonet exceeds a set limit (which is lower than that of the gas relief valve to prevent gas being valved before both ballonets are empty). Maintain the envelope pressure at about 15 - 25mm water, shown by the height difference between the outer and inner fluid in the manometers (which have no scale yet!).

The gas valve is basically only used to valve some gas if the airship is found too light during the pre-landing weigh off.

In the version released with FlightGear 1.9.0/1 both ballonets continuously received a constant in-flow of air instead. The degree of inflation (and total pressure) is controlled by "bleeding" more or less air from either ballonet relief valve.

On the prepare-for-landing request the ground crew will align to the current wind conditions. When landing you should aim to approach against the wind and arrive exactly in between the left and right ground teams with very low speed and altitude.

The ground crew is visible over the multiplayer network. 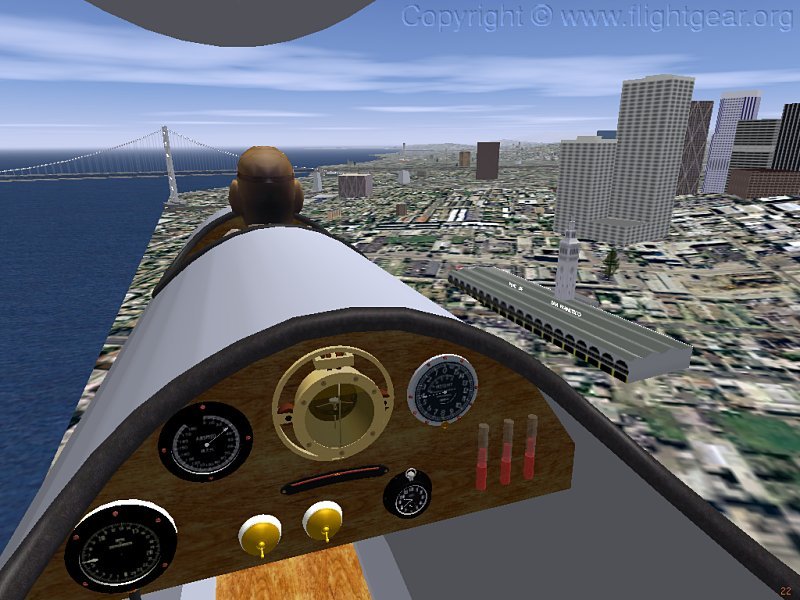 Upper row left to right: Airspeed indicator, Compass and Altimeter (Note: The altimeter reads in 100s rather than 1000s feet).

The Submarine Scout airship is armed with two 65lb bombs. The bombs can be dropped one at the time by actuating the default weapon trigger from the pilot view. Bomb impacts are visible over the multiplayer network.

Note: By default the weapon trigger is not mapped to any control in FlightGear. However, most joystick configurations put it on a button or a button + key combination. 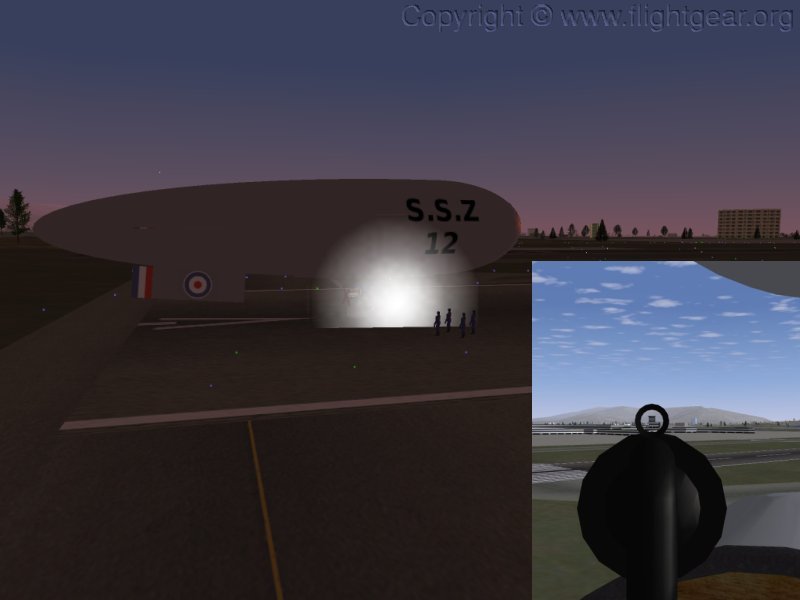 The observer view has an ALDIS lamp for morse code signalling. The ALDIS lamp can be picked up or stowed in the observer view by clicking the lamp handle. The lamp is actuated by the default weapon trigger in all views except the pilot view. The lamp state is visible over the multiplayer network.

There is no instrument on the Submarine Scout that directly show if the airship is light or heavy and what the static trim is. To see you have to reduce throttle to idle and wait for the speed to decrease. As the aerodynamic forces diminish the airship will start to rise or descent depending on its lightness/heaviness and its pitch attitude will show how nose/tail heavy it is.

Note: You can position the ground crew by Alt+click on the terrain. 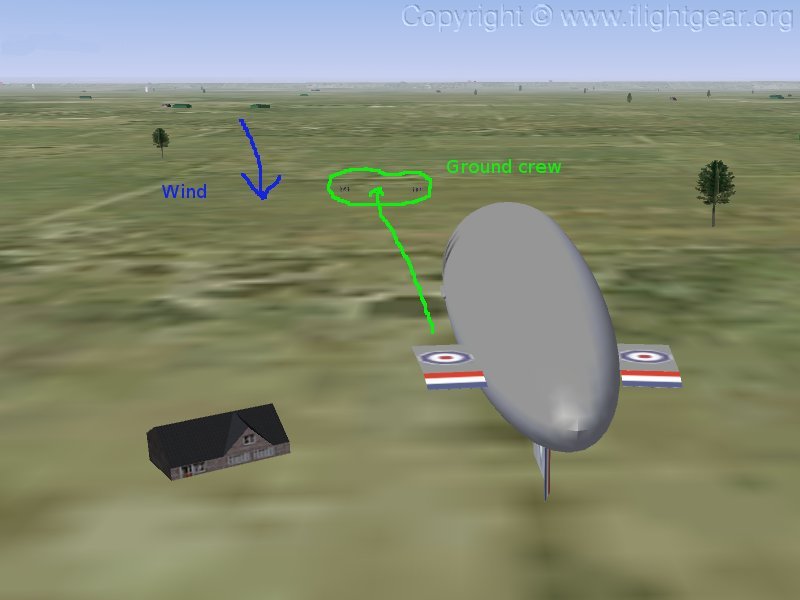