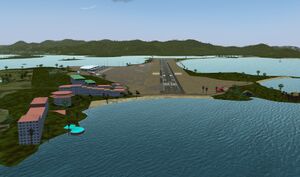 Princess Juliana International Airport (IATA: SXM, ICAO: TNCM) serves the Dutch part of the island of Sint Maarten (French: Saint-Martin). It is the second busiest airport in the Eastern Caribbean, after Luis Muñoz Marín International Airport in San Juan, Puerto Rico. It is named after Juliana of the Netherlands, who was crown princess when the airport opened.

The airport is famous for its short runway — at only 2,180 metres (7,200 ft), it is barely long enough for heavy jets to land. Therefore, incoming airplanes approaching the island on short final for Runway 10 have to fly extremely low, passing only 10-20 meters (30-60 ft.) over relaxing tourists on Maho Beach.

Pilots of the Caribbean used this airport.
Princess Juliana Intl was the base for Island Virtual Airways.