In addition it can be used for making trolls disappear by ignoring them, or when adjusting the lag settings.

view
Will make you jump into another pilot's aircraft and switch the views, just like your own aircraft.
This can be useful for example for viewing other pilots liveries close up, or watching their landings.
It might take a few seconds to load the other aircraft model and surrounding terrain, and the cockpit will not be functional.

chat
Clicking this button (it is actually not an checkbox) will make a chat prompt appear with that pilot's callsign filled in.

ignore
Do not feed the trolls, ignore them!
If there is an annoying pilot, ramming you or being mean over the chat, clicking this check box will make him invisible to you.
This is the recommended way to handle trolls. 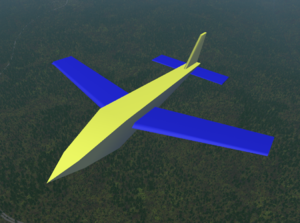 Pilots will be show in one of three colors depending on how an aircraft model was loaded.

White
The full model will be loaded as you did have the aircraft installed.

Green
A fallback model, a low poly model of either the same or a similar aircraft, will be loaded as you did not have the aircraft installed but a fallback model was defined.

Orange
The default aircraft model, also known as the "infamous glider" , the "yellow and blue glider", or simply the "glider", will be loaded as you did not have the model installed and no fallback model for the aircraft was defined.

The pilot list have three views that can be switched with the IM|Lag|SI button.

In the IM and SI views the aircraft will be listed using either imperial or SI (metric) units.

In the Lag data view the dialog will instead of distance and altitude show values useful for tuning multiplayer lag performance: The update frequency in multiplayer packets per second (pps) and the lag in milliseconds (ms).