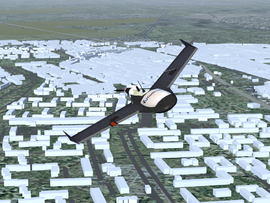 Buildings can be mapped in OpenStreetMap. Their shapes can be turned into 3D models for use in FlightGear scenery.

A perl script (bob.pl) is being written to turn the OSM data into 3D models. It is available at https://gitorious.org/fgscenery/tools?p=fgscenery:tools.git;a=summary.

osm2city.py is another project, under active development as of 06/2014.

Next to this basic code, there are several options, to be added behind the basic code.

-h 15
Note: buildings are always sunk 5 m into the ground, in order to account for non-flat terrain. These 5 meters are added on top of (or below, if you like) the building height.

All buildings in an area