Landing a Military Jet on a Carrier Tutorial by Example: The Grumman F-14B Tomcat

The content of this page is meant to guide virtual pilots of military jets on how to land safely and consistently on an aircraft carrier using conventional take-off and landing (CTOL). The content of this guide is to a large extent specific to the mighty Grumman F-14 Tomcat in FlightGear. However many tips and techniques can be used for piloting other 4th generation naval fighters (especially NATO / American like the McDonnell Douglas F/A-18 Hornet).

Landing a jet fighter on a moving carrier again and again is simply difficult and requires many (dozens) of hours of virtual training. Real naval pilots have hundreds of landings on airports and hundreds of hours of training on the aircraft type plus significant simulator training before they are allowed to make an attempt on the real thing.

When you get the hang of it (and you will) and enjoy flying according to procedures, you will find your training time very rewarding. When it gets too easy, just chose bad weather, night time, different weapons/fuel load and you will get challenged further.

The F-14 Tomcat is one of the more difficult planes to fly at slow speed. Consider training with an easier plane like the Grumman A 6E or the Bourrasque.

The basic source of truth and detailed procedures is the Naval Air Systems Command 01-F14AAP-1 "NATOPS FLIGHT MANUAL NAVY MODEL F-14B AIRCRAFT", which is a nearly 1000 pages pdf manual available on the internet.

The Chief of Naval Air Training has excellent instructions in the P-1211 ("Carrier Qualification, Flight Training Instruction T-45 Strike") at [1]. Even though it is for the T-45 Goshawk jet trainer, many things are easier to understand than in the concisely written NATOPS.

Additionally I found the following resources / videos very informative, even though they mostly relate to the DCS F/A-18C Hornet:

Difference Between the Tomcat and the Hornet

There are three main differences between landing the F-14 Tomcat and the F/A-18 Hornet on an aircraft carrier:

Systems References in the Real Tomcat and the FlightGear Tomcat

"NATOPS" refers to the reference described above. It is assumed that the reader is acquainted to the FlightGear F-14 Tomcat wiki page.

The Angle of Attack System

The system is specified in chapter 2.33 in NATOPS. Things to remember:

The carrier landing procedure is described in chapter 8.5 in NATOPS (around page 383 in the pdf). Especially figure 8-3 is core (remark that the top of the figure states a maximum landing gross weight of 54000 pounds).

There are three types of approaches depending on visibility conditions and day time:

(Radio call procedures are not mentioned. Something like ⇧ Shift+o tells which key(s) to press in FlightGear specific for the F-14) 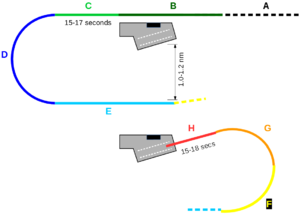 In contrast/for reference the procedure for take-off is (NATOPS chapter 8.4 has the details):