All the way back in May 2011, we addopted a new status-rating system for aircraft. So far, only about 1/3rd of the aircraft have actually been rated. If you're an aircraft developer or enthusiastic and your aircraft is/are not listed under the "Show aircraft with known status only" option of the download page, please consider rating their status. All you'll need to know/do is described at aircraft status indication. 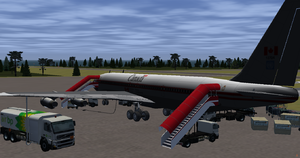 The Boeing 707 (versions -3J9C and 320C) continues to be updated. The most recent version includes a new livery, contrails, a more efficient navegation system, pitch trim, and a bunch of airport operations (taken mainly from the Airbus 330), including a nice fuel truck system, de-ice truck, catering, and so on.

The scenery models database has seen this month an addition of about 200 new thumbnails of models, bringing the number of thumbnails left down to 152 and making the database more pleasant to browse!

Moreover, there are new models, in Leipzig, China and Japan. Dresden Airport - Germany (EDDC) was updated with many signs and hangars, and at Sion Airport - Switzerland (LSGS), a terminal was added .