I'm proud to announce the official launch of the FlightGear Glass Cockpit Project, short FGGC. The source is largely a dusted-off version of OpenGC by Damion Shelton. I'd like to thank Damion for leaving us a pretty solid, well-thought-out codebase and hope he will one day return to developing his own version of it. In this case, a re-merge is not out of question.

Where the project stands

So far, we have a dusted-off version of the latest release. I made several small design improvements and updated the interface code to match the current FG cvs code. Right now, the code compiles,runs stable, accepts input at udp port 5800 and processes it mostly correct. There is currently one working set of gauges, modelled after the Boeing 777. 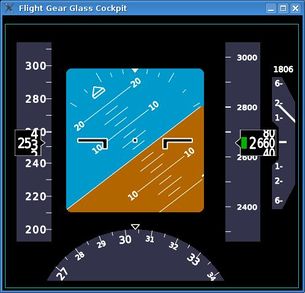 The Boeing 777 PFD in action

-- From the fortunes database

OpenGC 0.3-alpha3 has only been tested on LINUX operating system (Ubuntu 10.04). LINUX systems must have GCC version 4.0.0-8 or later, and graphics card with OpenGL support. Before unpacking and making the modified version of OpenGC there are five open source programs that must be installed on your computer:

The specifics of each package is available at http://www.opengc.org/developers_building.html. Newer versions of each file have been tested, and there seems to be no backward compatibility issues, but the files above have been proven to work. Installing these programs is the most important part of having a working program. After SUCCESSFUL INSTALLATION of the programs follow the step by step guide to setup OpenGC on your system.

The latest source package can now be downloaded at the downloads section of the sourceforge project at http://sourceforge.net/projects/fggc

Compiling the sources on Linux

Notice that this requires valid data being sent in via the serial port. To get this valid data requires the Autopilot program be loaded onto a processor that is actively transmitting data. In the directory /FLTKApp/ call "./OpenGC opengc.ini: and the cockpit display should appear. After completing your test data should be logged in the /FLTKApp/datalog directory under the name telemetry.txt.

Start FlightGear with your favorite options and the following to your commandline:

A Git repo now exists for FGGC on sourceforge.net. Here's how to clone it: First, make sure git is installed on your machine. Easiest way to do that is by typing git in a shell and see what happens. Then create a directory where you want to host the repository:

The git repository is read-only however, so you still have to patch-mail your improvements to me. Or you might just join the project at sourceforge.net

I'm available by mail to feyn at gmx dot de, or you can catch me in the FlightGear IRC channel under my screen name of Raazeer