The Douglas A-4K Skyhawk is a carrier capable, multi-role strike aircraft formerly operated by the Royal New Zealand Air Force (RNZAF) and now Draken International. The A-4K was operated by the RNZAF from 1970 to 2001 and Draken International from 2013 to present day. In the late 80's the aircraft were significantly upgraded under project Kahu. This included a major redesign of the cockpit including HOTAS, Ferranti 4510 wide-angle HUD, two HDD's (head down displays), and upgraded avionics/ electrical systems including the installation of a Westinghouse AN/APG-66 radar (same as F16's), ALR-66 radar warning receiver, Tracor ALR-39 chaff/flare dispenser, and additions in weapons capability including the ability to drop laser guided bombs and fire AGM-65 Maverick (air to surface) missiles. The A-4K Kahu is the most modern A-4 Skyhawk to ever exist (however it could be argued that the Lockheed Martin A-4AR Fightinghawk surpassed this in 1997). It is avionicly equivalent to an F16. The original un-upgraded A-4K airframe was based on the A-4F with the the differentiation of a squared off tail, and the addition of a drag chute etc.

The FlightGear A-4K Skyhawk is still under active development. There has been one main release since the project was started in mid 2015 (one to FGMEMBERS and soon one to FGAddon). The first release included features such as an animated canopy, RNZAF livery, 3D Kahu cockpit, static weapons, droptanks, static flare dispensers, as well as basic exterior lighting. The second yet to be release (currently avaliable from FGMEMBERS), includes a near complete modeled 3D Kahu cockpit, HUD simulation, flares, guns, smoke, a modeled drag chute, toggleable access ladder, as well as new liveries. The A-4K has been under development by Hugh Wilson (SplitDecision), and Martien van der Plas.

The following features and more will be added by the third release...

If anyone is interested in helping with any one of these things or more. Please visit the forum topic and register your interest... https://forum.flightgear.org/viewtopic.php?f=4&t=27751 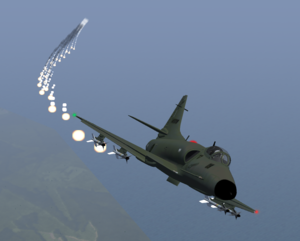 The main A-4K repository is found in the FGMEMBERS GitHub repository. This is updated as features are added/ modified. Additionally the A-4K will be hosted in the FGAddon repository and a new release will be committed each year.