Ailerons (red) on the wings of a Cessna C172

Ailerons are hinged control surfaces attached to the trailing edge of the wing of a fixed-wing aircraft. The ailerons are used to control the aircraft in roll. The two ailerons are typically interconnected so that one goes down when the other goes up: the downgoing aileron increases the lift on its wing while the upgoing aileron reduces the lift on the other wing, producing a rolling moment about the aircraft's longitudinal axis. The word aileron is French for "little wing." 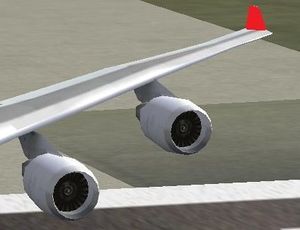 A wingtip device (red) on the wing of a Boeing 747

Wingtip devices, sometimes know as winglets, are usually intended to improve the efficiency of fixed-wing aircraft. There are several types of devices, and though they function in different manners, the intended aerodynamic effect is to modify the aircraft's wake in some beneficial manner. Wingtip devices can also improve aircraft handling characteristics. From a marketing standpoint, they are also valued for their aesthetic appeal, and aircraft have been equipped with them for cosmetic reasons as well.

On an aircraft, the rudder is called a "control surface" along with the rudder-like elevator (attached to horizontal tail structure) and ailerons (attached to the wings) that control pitch and roll. The rudder is usually attached to the fin (or vertical stabilizer) which allows the pilot to control yaw in the vertical axis, i.e. change the horizontal direction in which the nose is pointing. The rudder's direction is manipulated with the movement of foot pedals by the pilot.