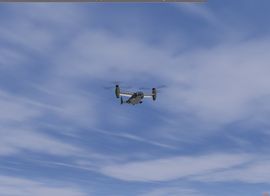 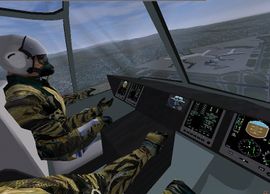 The first thing to do is start the engines by pressing and holding down the } key. The rotors take a while to start. The rotors slowly increase in speed until they become a blur.

The simplest take- off is a vertical one. Make sure the controls are absolutely centered before starting otherwise the aircraft will roll and crash into the tarmac. Increase the rotor pitch by pressing the "Page Down" key. Yes, that's right, "Page Down". For some reason page up decreases the pitch of the blades or the power. Press the "Page Down" key and watch the aircraft climb vertically into the sky.

Once you are up to a good height, say 2,000 ft, slowly test the controls. Left stick makes the aircraft roll to the left, but starts a yaw as well probably due to the airflow hitting the tail surfaces, which means that now you are spinning like a top at 2,000 ft and going nowhere. To stop the spinning, use opposite stick, that is, stick to the right. Rudder controls will work as well, I suppose but I did not try them.

On my second flight, once again I had to correct a rotation to the left using right aileron, very gently, to get the V-22 pointing in one direction. A little forward speed was gained by tilting the rotor forwards, progressively. At this point a strong pitch up was encountered, and after a struggle , level flight was restored. The rotors were tilted progressively forwards, and the aircraft gained speed without losing height. Pitch changes were easily controlled this time.

With the rotors at full forward tilt, the V-22 behaved like a fixed wing aircraft, although ailerons were a bit slow to respond, but stable turns could be made.

On the first flight, landing was easier than I thought, from a vertical hover, spinning stopped, I lowered power until a comfortable 2,000 ft per minute descent was indicated on the lower right instrument. A slight forward velocity was also experienced, which I left without checking. At the last moment, I increased power and slowed descent to 200 fpm and landed solidly.

The descent is the most stable and pleasant part of the flight for me. The V-22 will fly hands off in a descent, almost. I established a 2,000 fpm descent and descended all the way down to the ground, landing on a roadway at about 40kt forward speed and about 2,000 fpm, which is slightly excessive. 400 fpm is the maximum that would be comfortable, I would think. Once I have the 'collective pitch' figured out this should be easy.

After two flights, this is definitely an aircraft I want to fly again, with its fascinating VTOL capability, impressive looks, attractive digital cockpit and decent handling. One could really go places in this one.