This is a draft for a tour article announcing the 2020.2 LTS, BIKF default airport, and Iceland improvements, as well as focusing on settings to enjoy Iceland properly.

Welcome to Keflavik and Iceland

[ Screenshot of Iceland from space ]

Keflavík International Airport (BIKF) is the featured airport for the LTS. Keflavík airport is the largest airport in Iceland with 10 million people passing through in 2018. It serves as the international gateway to Iceland, and its 3 km runways are a Space Shuttle emergency landing site.

[Screenshot of shuttle landing here e.g. this, preferably one with current keep and updated airport]

The gateway to Iceland

Keflavik Airport is modeled in detail, including and Rainbow (“Regnbogi”) art installations at the airport.

[ Screenshot of The Jet Nest at Keflavik airport: 1 or 2 ]

For Iceland there are also buildings, roads, and objects like pylons for the whole country generated by the OSM2City project. These are available as a separate download [which will be added to TerraSync a later date?]. OSM2City buildings compatible with 2020 LTS have improved visuals and render faster.

A land born of fire and ice

A land of fire, as well as ice, Iceland is still growing, and new parts are still being formed under the dancing Northern Lights (remember to turn Auroras on and watch!). An example is the island of Surtsey formed in 1963 - and Surtsey's two volcanic vents are now modeled with multiple levels of activity in the LTS. Surtsey is within viewing distance from Vestmannaeyjar Airport (BIVI).

Volcanic activity at the main crater in Surtsey:

Iceland's volcanoes are often strato-volcanoes with their steeper cone shaped sides, as the viscous lava here flows less easily and becoming hard before spreading far. Eruptions can be explosive, as gasses remain trapped. There are some shield volcanoes too, with their the shallower domes shapes similar to the volcanoes of Hawaii.

Mount Herdubreid (a table mountain) is a volcano in Vatnajökull National_Park, Iceland. The volcanic desert it sits on is a lava field created from easily flowing eruptions of nearby shield volcanoes:

[Screenshot of a volcano with no eruption?]

Flightgear models several Icelandic volcanoes at multiple activity levels; Eyjafjallajökull, Surtsey, and Katla. Eyjafjallajökull and it's cloud of volcanic ash caused severe disruption to aviation in 2010. Katla is a far bigger volcano located nearby. Past eruptions at Katla have ranged from a Volcanic Explosivity Index (VEI) of 4 like Eyjafjallajökull, to a VEI of 6 like Mount Pinturbo (1991) or Krakatoa (1883). Scarily Katla is somewhat overdue for an eruption. Screenshots don't do justice to the boiling turbulence of a volcanic plume like Katla. We won't spoil it, so you can discover and appreciate the scale of the forces involved [unless someone has a particularly nice screenshot?]. FG's Advanced Weather engine now models the increased turbulence in wind-fields associated with volcanic activity, so beware!. To set the activity level of a volcano fly to the area, and look in Environment > Volcanoes to choose from the volcanoes in that area.

Re-creating the Icelandic setting in FG

Iceland has rugged volcanic terrain with glaciers, deserts, ice caps, marshes, fjords and a cool wet climate. There is plenty to discover. The island has only been colonised recently by both nature and people. There are almost no trees, as the young forests were cleared by early settlers.

[ Screenshot of terrain with overlays ]

To re-create the stark subpolar setting, remember to turn on overlays which add high resolution 3d detail, and set Transparency Anti-Aliasing to MSAA in the GPU control panel (or supersampling on powerful cards). As Iceland has few trees, people with older GPUs may find they have spare performance and can use overlays in Iceland.

[ Screenshot of overlays with transparency AA turned up high ]

A place needs 4 dimensions to describe it, 3 in space and 1 in time. Any default setting can only be a moment in time, and in FG the ever-changing cycles of nature is simulated from the Environment > Environment Settings menu. In FG's environment sliders, Iceland is often suited being towards the autumn season with wet ground and moss. The more northern seas away from the south coast can ice up, so remember the ice cover control.

Flightgear's Advanced Weather (AW) engine simulates terrain-driven, continually evolving, weather - look under Environment > Detailed Weather > Advanced Weather settings for controls. To activate the weather simulation, choose weather scenarios in the list from "Core high pressure region", through to "Warm Sector" - these describe the air masses around your starting point. "Fair Weather" is fine, as it's just "Core high pressure region". Other types of scenarios will do things like tie weather to best guesses at vague METARs, and apply the same weather everywhere all the time. Using live METARs will additionally tie FG to weather conditions for the current time of day and season for that location - regardless of the time, date, and season you simulate.

To recreate the turbulent windfields associated with the rugged mountainous terrain make sure terrain effects and presampling is enabled. The controls for detailed gust controls, cloud shadows, ground haze and structure are also there. For shorter trips you may want to decrease the sizes of distinct air masses and scales of weather patterns, to see more change, more often. There are far more weather variables under the hood than are (and can be) exposed in the GUI. These weather variables are randomised each time the AW simulation is restarted - press 'Apply' to restart. Remember that to recreate Iceland's cool temperatures, the temperature offset needs be lowered to adjust the weather scenarios used AW simulation - put in a negative value to lower temperatures like "-25". As temperatures decrease, rain will turn to snow or hail as appropriate, and with lower temperatures you'll be rewarded more often with stunning halos and scattering by ice crystals in clouds.

Aurora, and sun halo. The halo is caused by light bouncing off ice crystals in the atmosphere. The halo is red as the sunlight from the low sun is red.

[ File:Aurora_and_ice_halo_(Flightgear_2020.x).jpg:Screenshot of Aurora in Iceland ]

Sun dogs on both sides of the sun caused by ice crystals , and a faint ice halo (Vatnajökull National Park, Iceland).

You can use craft such as the Cessna 172P/182S/182T-FG1000, Piper J-3 Cub (FG1000 option), and the rugged de Havilland Canada DHC-6 Twin Otter in your adventures exploring Iceland. Variants among these include support for floats for hopping between the dramatic fjords of the north/north-west (e.g. Ísafjörður - BIIS), as well as skis and winter kits to explore the many glaciers and icecaps. Some have bush tires to try your luck in the desert areas of the central highlands, or the moss covered lava fields of the south/south-west. Helicopters such as the Eurocopter EC 135, Alouette III (AI co-pilot can help), Eurocopter EC130/H130, and Robinson R-44 will let you reach a variety of places - some have floats (R-44, EC130/H130) and snowshoes (Alouette-III, EC130/H130) too.

Alouette-III over the meltwater lake (terminal lake) at the end of a glacier (glacier terminus or snout). [ 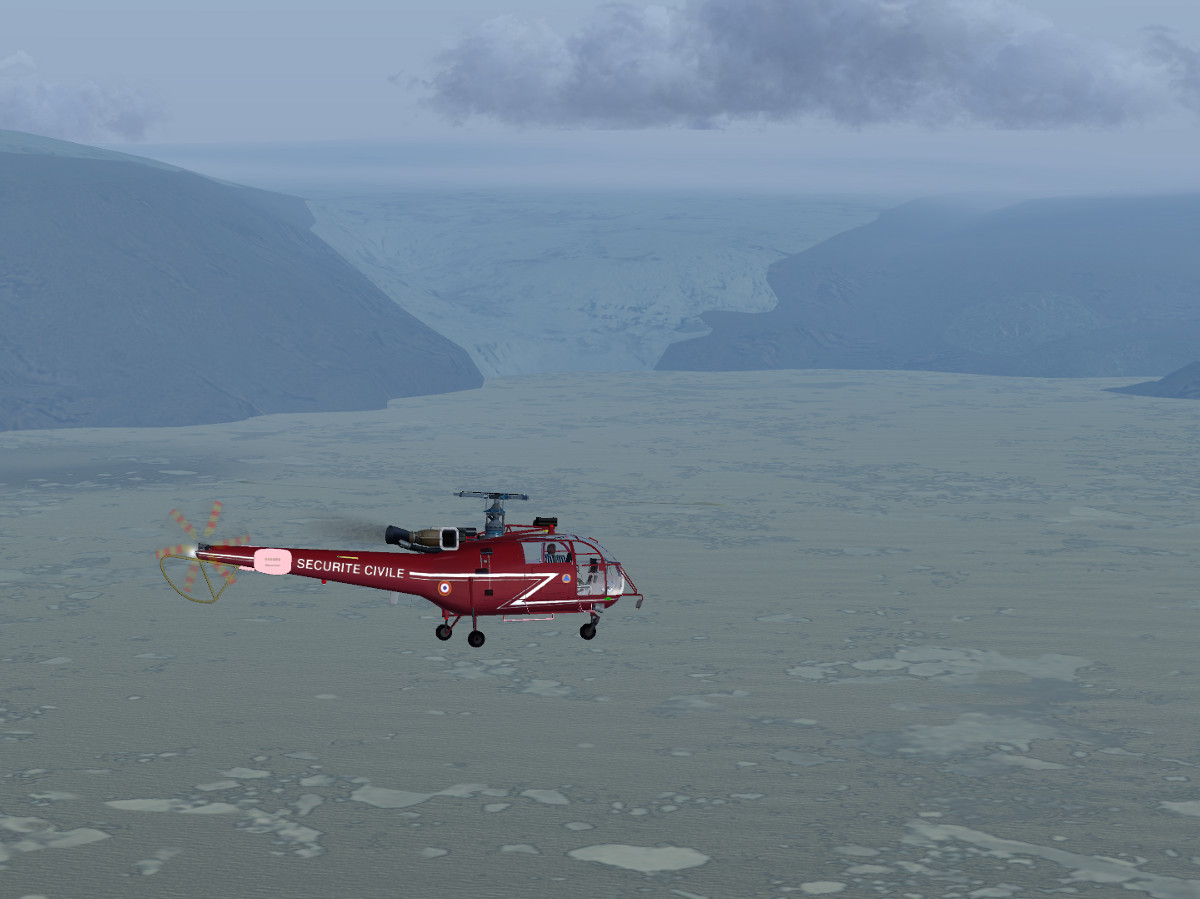 Closing line e.g. Stay tuned for the 2020 LTS release in the next few days