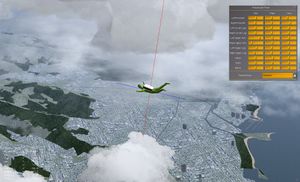 First discussed in mid 2006 [1], support for parachuters/skydiving simulation has been a recurring topic in the FlightGear community, tIn the OV-10. They are AI ballistic objects, and they use the translate and scale animation for parachute deployment. [2] Originally, the parachute drop screenshot was great because it showed off our dynamic "submodel" feature which might not be matched in capability by other simulators. [3]

Another suggestion that could be fun is to come up with some team competitions. How about a sky diving competition? If we can do aero towing, can we attach MP skydivers to a jump plane. Then individuals can choose when to jump out and the person that gets closest to the target wins? We'd probably need an improved parachuter model ... might be a fun project for someone ... [4]

In response to this, Ron Jensen came up with a skydiver simulation[5]

In 2009, Curt suggested how to simulate a simple skydiver:

In the same year, Stewart Andreason came up with a heavily revamped skydiver implementation for his bluebird, the jumper with animations . You can even edit the animation to see Waldo (walker/jumper) do more visually. Getting more accurate variability in free fall physics is an idea I tagged as difficult and low priority. Because I could not get an entire FDM in Nasal to accurately place the jumper's position, due to low frame rates causing an uneven result. I fixed the formulas on when the jumper exits the aircraft, and when the parachute is opened. From those two variables, I made the entire jump work off of a set of formulas for the stages: accelerate to free fall, free fall in spread eagle, pull chute cord, and float to ground. To be able to get Waldo to change velocities and positions in free fall would be a "next step" goal, but would probably need a separate FDM outside of nasal. Or if it Can be done in Nasal, some approach that exceeds the limitations I encountered. For adding Waldo to other aircraft, I did work up a "Walker addition patch" a few months ago for Anders balloon. It is still available for any interested aircraft owners. </ref> S Andreason (May 31st, 2009). Re: [Flightgear-devel] Sky dive free fall. </ref>

While FlightGear was designed as an aircraft-focused flight simulator only, there a a number of efforts creatively working around this by supporting vehicles/actors other than aircraft, including vessels, cars, trucks, a walker and even a parachutist.[6]

There is a Parachutist model and script in your FG models/Geometry/ folder. The Aircraft needs to have it enabled though.[7]

Stewart implemented basic skydiving, but it is by far not as advanced as what you found. it would be pretty cool to actually have controllable skydiving available.

Thinking about it, it would be a good thing to be able to "pause" the FDM Computations and control the Position by a script. That way a Vehicle or Aircraft could be carried by another (I think of loading a Jeep into an Aircraft, or carry an X15 by a B52. that way the above mentioned Skydiver could re-enter an Aircraft and hop out again.</ref> DFaber (Nov 27th, 2013). Re: Walking through the Scenery: The portable Walker. </ref> 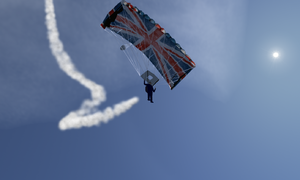 Erik committed a working version of Creare's Open Sourced version of the Parachutist to FGAddon: http://www.flightgear.org/tours/sky-diving-visualiation/

For the time being, It's in kind of a rough state but turns out to be quite some fun to fly. If any one want to take up on it to improve the user experience please do so.

Things that come to mind are:

Update2: Erik has integrated Dave Culp's para-glider model to be able to steer the parachutist when the chute is fully deployed [1]

ludomotico's goal is creating skydivers at an airport. In his case, Empuriabrava skydiving (LEAP), apparently one of the leading places for skydiving in Europe.

The idea is to see skydivers while you're landing my Cessna at LEAP, LECD or any other airport with this kind of activity. Ideally, such that it can be distributed using terrasync. [1]

DFaber's walker already features a parachutist IIRC - I think it's already implemented on the bluebird.

Scenery is a different matter, which may benefit from either custom-built scenery/shaders - or even by using some kind of workaround analogous to Thorsten's EarthView [2]

People looking for skydiving-related stuff to do in flightgear, you should check out the pilatus porter as well. Nicely challenging to fly, operational doors, and very much used as a skydiving airplane (at least in Europe). Pilatus PC-6 Porter [3]

People also interested in this, may want to check out EGKA. There's all kinds of activity there including people on motorcycles and a couple of guys with jet packs. The jet pack dudes might be able to be adapted into skydivers [4]

Regarding EGKA, the flyers are technically scenery objects, but if they can be adapted for skydiving as well that would be great. The pilots though, were adapted from existing FG models. [6]

Also, make sure to look at the paratrooper code in one of the military transports [7]. For example, it's the DC3/C47 that has the paratroopers. Douglas C-47 Skytrain#Paratroopers [8]