In the real world, oil platforms pose one of the most challenging places to land a helicopter. They can be within sighting distance or hundreds of miles off the coast. In the FlightGear world, such oil rigs can be found just as well.

At the moment, there are two different oil rig models in FlightGear, one with a helipad, and one without it. 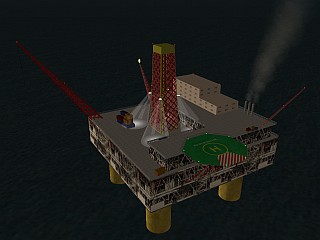 These two models are placed more than 500 times at real life positions in the North Sea, i.e. more than 300 times with a helipad and over 200 times without helipad. They are mainly between Great Britain and Norway/the Netherlands, but a few can also be found north of Wales and south of Ireland.

Here is a list of some easily accessible oil platforms:

The following map shows the position of all oil rigs: 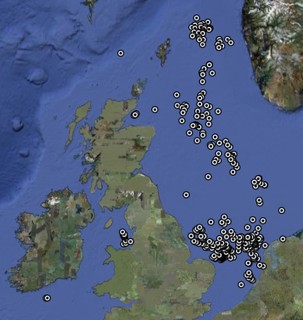 How to start a helicopter on an oil platform

Coordinates to start an EC135 on oil rig Lennox.

To place a helicopter on the helipad of an oil rig, enter the coordinates in the "Location (in air)" dialog in the simulation. This works very well with the EC135, but the origins of other helicopter models are slightly displaced, so that you might have to define an offset ("Distance") of a few feet.