Kolbenz-Winningen Airfield (german: "Flugplatz Kolbenz-Winningen"), is an airfield located in south-western Germany, about 5km/3nm outside the city of Koblenz and close to it's district Winningen.

The field is best known for its location right next to the Moselle River, which flows directly south of the airfield about 120m below the airport reference height. The city of Koblenz is home to the "German Corner" (german: Deutsches Eck), where the Moselle joins the river Rhine. Other important visual reference points in the area are the 135m high "Moseltalbrücke" over the Moselle to the west and the 260m TV tower to the south-east. 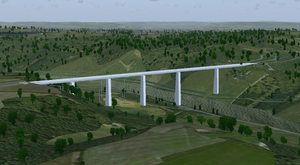 A61 Moseltalbruecke over the Moselle seen from the south 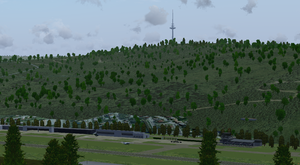 Originally Kolbenz-Winningen airfield was built after the field Koblenz-Karthause had turned into a residential area in 1965. The airport officially opened in 1971.

Today, the airfield with its 1175m asphalt runway is approved for aircraft, helicopters up to 5,7t and ultralight aircraft. There also is a 950m grass runway north of the asphalt runway mainly used for gliding operations. The airport is home to the city's aeroclub with hangars in the north-eastern corner. Alongside a commercial flight school the helicopter squadron of the Rhineland-palatine police is based in Koblenz.