Frankfurt-Egelsbach is named after the nearby town Egelsbach about 10km / 5nm south-east of Frankfurt am Main Airport and 17km / 9nm south of Frankfurt city center. The runway is perpendicular to the highway A5 in the west and the train line Frankfurt-Mannheim to the east. Both of which are important visual references in the traffic pattern.

The airfield is approved for aircraft 20t and currently (2022) the airport with the most GA flight movements per year in Germany. Egelsbach is home to around 30 companies, several flight schools and clubs. Due to the large variety of aircraft types, Egelsbach is the only airport in Germany with separate visual departure and approach procedures for fast and slow traffic.

The helicopter squadron of hessian police is based in Egelsbach.

An old version of Egelsbach with mostly shared objects is available via TerraSync. In 2021, the airport was completely redesigned and rebuilt and included in the Frankfurt custom scenery. All main and secondary buildings are modeled in detail and many parking positions have been added. 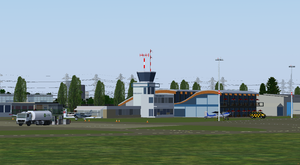 View of the tower building, the restaurant and fuel station