Flightgear maintains an in-memory recording of the current session. To avoid running our of memory, only the last minute or so is recorded in full detail, and older data is gradually pruned.

The in-memory recording can be saved to a file.

There are various additions to record/replay on next: 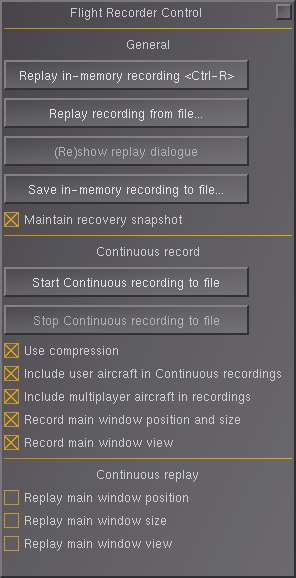 the flight recorder tapes are only 1 or 2 hours max... at one time i wanted to do one for a cross-country flight but when i saved it i only got the last hour or two

FG 2.6.0 introduced a new replay system which can be adapted to individual aircraft and provides better recordings/playbacks. It also introduces a new GUI as well as a dedicated file format for serializing flights to disk: Fgtape.

The instant replay dialog for FG2.4.0 and earlier.

For FG 2.4.0 and earlier, a simple dialog box is presented with a couple of options (duration of replay and view type).

To return to normal flight, press 'p' twice (pause/unpause). This returns you to the point where you selected Instant Replay. You cannot back up 30 seconds or so and try that landing again. Also, it is currently not possible to save the replay buffer to a file to load and replay a flight later on.

Note: only data directly related to your aircraft is saved and played back, AI objects, multiplayer aircraft or any random features will not be replayed.

[Something similar to this is on next - see above.]