The FlightGear Manual has received some nice updates. Most notable are the new screenshots to better represent FlightGear's current capabilities. Significant effort was also invested in reviewing and editing content to improve accuracy and readability. Chapters 9 and higher will be updated at a later time. Non-English versions will immediately benefit from the updated screenshots and improved accent/graves support, but the other content aspects require some translation work to align with the updated English version.

In 2018.3, —parking-id is now an alias for —parkpos. This means that either of them may be used to specify a parking position, fixing a bug introduced a few years ago.

The JSBSIM team synced their latest work to FlightGear: changes include:

Build folders (e.g. simgear-build) are now created when missing during subsequent executions. Prior versions of the script only created these folders during the first execution. This prevents the script from breaking if you subsequently delete the build folders. 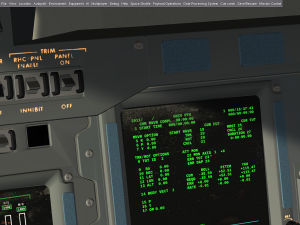 Milestone 10 of the SpaceShuttle was released on the 16th of September, adding 3D panels for the O14-O16 circuit breaker panels, various effects for the cockpit, displays, and windows, experimental support for "dogleg" offplane targeting, addition of Lajes Air Base, Wake Island, Ascension Island and NAS Oceana as a landing site, addition of a leakage simulation for propellant, addition of canvas dialogs, and many bugfixes. This is now available on FGADDON. We highly recommend giving the SpaceShuttle a try!

Version 5.1.0 was released on the 7th of September: changes include:

This version was made for FlightGear 2018.3+, and may not work correctly on earlier FlightGear versions.

The Viggen in FGAddon is now at version 4.311. Major changes in this version include:

F-15 V1.8 IAF Livery with conformal fuel tanks in flight over the alps

The F-15 (V1.8, 2018-08) has improved aerodynamics, can be fitted with Conformal Fuel Tanks (CFT), and has some long standing faults in the mass properties fixed. Noticeable changes will include better handling with heavy stores, increased drag from stores. Also in this version of the F-15 is support for air to ground guided missiles, i.e. the MK-84.

A focus of this version of the F-15 is optimisation of resource usage which will hopefully improve the framerate on all systems, I've seen an improvement of upto 100% (i.e. from 30fps to 60fps). For the technically inquisitive this extra performance has been achieved by merging the entire cockpit interior into a single 3d model and texture; together with use of the props.UpdateManager to improve the canvas rendering, and reduction of the aircraft Nasal rate to a maximum of 30hz.

The autopilot has been improved Autopilot by Josh (it0uchpods), this new autopilot more closely models the actual autopilot in terms of both modes and how it functions.

F-14 Kneeling for cat launch on the Nimitz

My main focus on the F-14 has been to improve the low-speed handling; particularly to aid Case 1 (daytime) carrier recoveries. This has resulted in revision to the aerodynamic model, including new data for the flaps, slats, spoilers now have yaw moments and are more effective at higher alpha based on pilot reports. The APC will now aim to hold alpha rather than airspeed, it works reasonably well however if you are too low or descending too quickly it is wise to take control of the throttles. Indicated alpha (units) as displayed on the indexer has been adjusted based on the touchdown geometry of the hook a 15degrees indicated. Also improved is the initialisation code for starting on a carrier, the positions have been adjusted for the FG carrier fleet, this was a particular problem when starting on the Truman.

The wingsweep, wing bend and wing damage are now better modelled, with a long standing bug fixed that caused the wings to sweep instantly to the oversweep position. Manual sweep will work better (and can also be bound from the new joystick configuration dialogs)

The Cockpit model has had some bug fixes, the disappearing HSD displays are fixed, together with a general tidy up of materials and textures.

The external model has now got the AOA indexer repeat on the nose gear.

Finally the F-14 will be able to replay carrier landings (and tanker refuellings) properly. Although note that after the replay stops it is possible that the carrier will become unsolid.

New Lufthansa Livery for the 747-8i

Lars0817 made a nice new livery for the 747-8i with Lufthansa's new blue livery. It is now available on FGADDON or directly through the launcher. 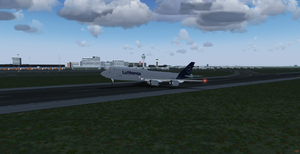 Contributions this month include: 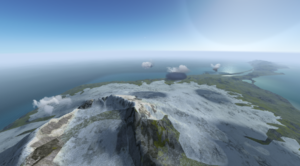 Jan Mayen with the Beerenberg volcano in the foreground

The Arctic island of Jan Mayen, north east of Iceland, received a makeover with corrected elevation data and coastlines, and is now available via TerraSync. The volcano, Beerenberg (2277m) is also now one of the volcanoes simulated in FlightGear, making for an impressive sight as the snow covered peak belches out smoke and ash. The island's airstrip, Jan Mayensfield (ENJA), has a 1600m dirt runway, perfectly suited for the DHC-6 or c172p's skis!

Note: Torsten Dreyer posted on the mailing list: I am currently trying to get the latest terrasync data upstream to our master copy at http://flightgear.sourceforge.net/scenery/ which for whatever reason is painfully slow. The rsync is now running for more than 36hours and still processing data. Because of this, there might occour some inconsistencies and sha1 mismatches in the Terrain folders for the Oahu and Jan Mayen area. Some of the folders of recently modified /Objects may also trigger errors. Once the rsync has completed, those errors should go away. 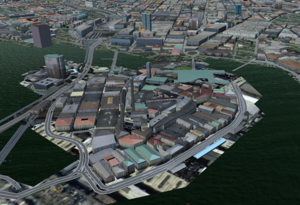 Custom scenery is now available for Sweden, covering Stockholm (coordinates W=17.00, S=59.00, E=19.20, N=60.00 (Uppsala, Stockholm, Nynäshamn)). The custom scenery is available through github at https://github.com/saul-rodriguez/SWEDEN . Use a git client or directly the "download" button on the web interface. 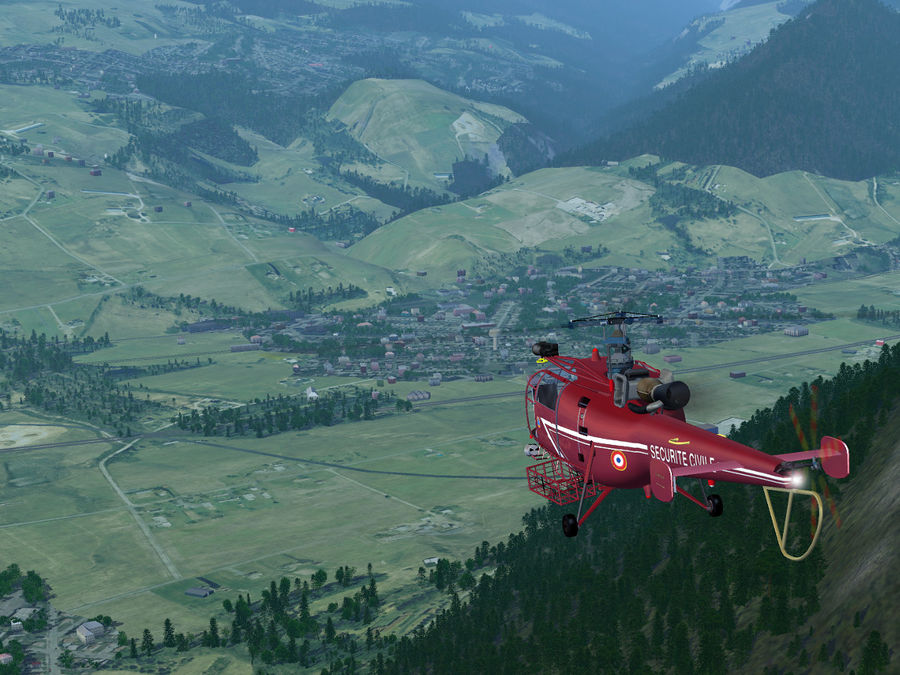 Thanks for reading FlightGear Newsletter September 2018!