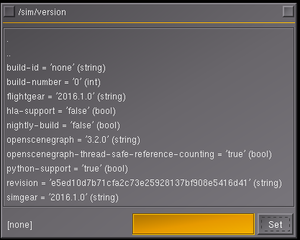 The point of FGPythonSys is simply implementing something for fun - pretty much the same reason that most things in open source are done. I find that justifying its existence is a little pointless. Anyway, one interesting thing that could be designed would be a set of aircraft base classes in FGData implementing some basic functionality/instruments/systems, etc. Then the aircraft can use OO (object oriented) inheritance to expand on the base class in an aircraft specific way. Of course this could be done in Nasal, but Python's OO design is far more advanced, especially with GC (garbage collection). Not that such arguments are relevant ;) By the way, I'm thinking that aircraft/content Python would be a restricted subset of the full Python framework. Anyway, all of this is in the realm of fantasy unless people are willing to get their hands dirty and play with C++ code.[2]

An experimental SGSubsystem integrating an embedded Python interpreter in FlightGear using the existing SGSubsystemMgr infrastructure (currently not merged with sg/fg next).

Talking about building something awesome, do you have coding skills? If so, what is your opinion of code implementation via test suites? If you are interested in converting your dreams into any type of reality, then join in the thread at [1]

, git check out my FGPythonSys branches (into clones of the official repositories), and start implementing awesome new features [3]

On Linux, you will want to make sure that the python3-dev and cppunit packages are installed (e.g. sudo apt-get install python3-dev cppunit, you can then set up remote tracking branches for the sg/fg and fgdata repositories, e.g.:

This is just a collection of existing FlightGear related scripts (Python) code that may sooner or later benefit from being able to run within the FlightGear session:

It's worth pointing out, there's plenty of people who would like to work on scenery, but find the setup and import / processing / export steps very tricky - especially if they've no experience with GRASS (or QGIS). Any scripts or workflow documentation that knowledgeable people make available is a huge benefit. (I also think there's probably some easy hacks that could be made to the terra-gear tools to simplify the commands and file structure, but that's a discussion for another time)

Edward d'Auvergne has been implementing a test suite infrastructure using CppUnit for flightgear itself (not simgear) as part of his FGPythonSys experiments [1], and noticed that modularisation is problematic due to the dependency of globals and everything that then brings in. I wonder if coming up with a way of breaking the dependency on globals.hxx - passing the data structure (or a mimic in the case of a functional test) into the subsystem using the new subsystem infrastructure, using property subtrees and synchronisation, etc. would allow the subsystems to be truly independent. [4]

Edward developed this as part of his FGPythonSys experiments to have full system test coverage [1]. The test suite is based on the venerable, yet old CppUnit framework [2]. Edward d'Auvergne has spun this out into its own standalone branches rebased to 2016.4.0 and made independent of embedded Python [3]. The test suite is an almost direct Python->C++ translation my own comprehensive test suite for one of my own software projects [4]. The benefits of such a framework, assuming a good test coverage, include: - Enabling quick and brutal refactorisation of the entire code base - ensuring that the end result works perfectly well. - Interest in independence and modularisation of all FlightGear components to simplify tests. - If all subsystems are tested for standalone creation, destruction, init(), reinit(), shutdown(), etc., then repetitive resetting of FlightGear should work flawlessly. - Allow valgrind and other heavy tools to be run on the absolute minimal code paths, by running individual tests. The functionality of the test suite can be very much expanded in the future [5]. For example there are CppUnit classes for XML output, rather than text, so this test suite is ideal for automated testing and presenting the results through web pages (e.g. Jenkins).[5]

The Nasal C APIs are pretty straightforward actually (especially for people familiar with C and embedded scripting), and it may make sense to look at the corresponding docs - even if just to learn how to port existing Nasal APIs to Python:

the focus of the efforts in my experimental FGPythonSys branches

is more to provide a Python interface to core FlightGear programming rather than replace Nasal. For example one aim is to convert the whole of the SimGear programming interface (API) into a Python library. Another is to expose the subsystem interface to allow for Python modules to create new FlightGear subsystems. As a biarre aside, if FGPythonSys was designed to replace Nasal, it would also be able to fully replace the XML parts of aircraft as well. In any case, I have been a bit busy with RL and there is no one helping in the task of advancing FGPythonSys. So at this rate, replacing Nasal with Python will only be a pipe dream for a few content developers.[6]

Here is another update for the FGPythonSys code. I have rebased the branches on the current 2016.4.0 flightgear/simgear/fgdata branches. Not only that, but the branches now work on MS Windows. As these worked on GNU/Linux previously, and Mac OS X should just work, the branches should now be functional on all operating systems! Note though that only the CppUnit code needed updating to work on MS Windows, the Python code worked without modification. The branches are:

As before, these are based on the CppUnit test suite branches: