Some of you may have noticed that we have some dds textures in the flightgear data, mostly in the scenery textures. This texture format got some interessing properties, and some drawback.

The main advantages in using mipmapped dds compressed texture instead of png (jpg, rgb etc) are:

in the following, we will assume that the advantages are what we need: save space in ram and have a faster 3D loading, on a compatible driver/GPU, and at the cost of some disk space.

As the texture development is easier to be made in lossless format, and dds being unsupported on some system, we won't ask for a dds usage in git, but we will see how to go from .png (rgb, jpg ...) to .dds. there's a case where it's good to have dds originaly in git, it's when the mipmaps are not done by a tools, but by hand, eg for scenery textures.

there are some plugins for gimp or photoshop do make dds, but here we will use tools working in command line, we don't want to open each texture by hand ;) but speed up conversion with scripts:

both are available for mac and windows, and in most linux distributions (check nvtt for the nvidia tools)

preamble: the code line here works on linux bash, for windows the syntax can be slightly different.

before converting the texture, we start by some verification:

next we have 3 case; texture without alpha, texture with alpha, and normalmap. in all the case the texture need to be vertically flipped before the conversion. The dds conversion will work whith all the texture format supported by image magick, and there's a bunch of them!

Here are the steps, by texture type case:

if we need to keep the alpha channel we use the bc3 option:

So you can inverse the normal in the effect file (ex needed), or a color inversion in the texture do the job, with a bc5 option. As we have a normal map as original texture, we will tell it to ncompress, but you can use a height map instead (without the "-normal" option). something not clear here is that the normal texture in png, converted to dds, looks way better in FG: proof.

note that you need to have an extra line in the .eff file, to tell the normals are .dds:

Now is time to put the pieces together, and to use a bash script to convert fgdata parts to dds: 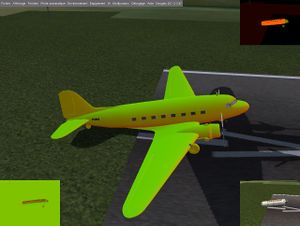 with rembrandt and dds textures with alpha layer, used in animation for opaque objects, the result can be strange (a fluo uniform color). the solution is to remove the alpha layer for textures used in opaque objects, so be sure to keep alpha textures only for transparent objects in the modeling stage.