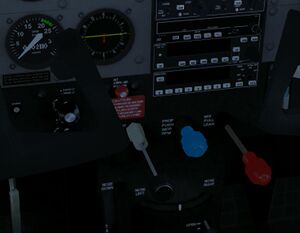 Engine controls of the Cessna 182: Propeller/RPM (blue lever) in high-rpm setting (between Throttle/black and Mixture/red)

Before the invention of Constant speed Propellers the pitch of the propeller blades was fixed on the ground and no adjustment to the phase of flight was possible. However, the propeller pitch has important consequences for the generated thrust and also for the high-rpm/low-rpm flight regimes (climb, cruise):

With airplanes equipping a constant speed propeller, the pitch of the propeller blades is variable and can be adjustet to the needs of the different phases of flight. A device so-called "Governor", takes care of maintaining the pitch that is requested by the pilot. It does this by pumping engine oil into a device located at the spinner, adjusting the oil pressure which then actuates a lever rotating the blades. When the blades rotate to accomodate a low-rpm setting, they "eat more air" per revolution of the spinner and thus need more torque from the engine, slowing it down. This prolonges engine life and saves fuel without severily compromising airspeed and can be viewed as some sort of "gear shift" like in a car.

How it is operated

The pilot can adjust the desired setting using the blue cockpit lever, directly setting the desired engine RPM. The full-in setting usually is the "high-rpm" setting desired at takeoff and climb, while the full-out setting is "low-rpm" desired at cruise.

When failing, most constant speed props are designed to "fail forward", that is to the "high-rpm" setting for safety reasons.

Changes to the blue lever should occur in the "low power" configuration: