A generic cockpit shaking effect that simulates G-forces induced by ground roughness is available since FlightGear 2020.04. 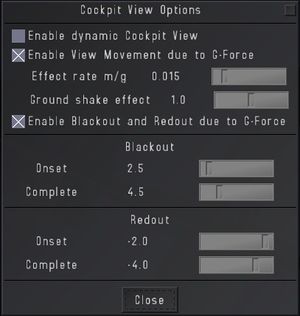 The effect is off by default and can be easily enabled trough the Cockpit View options accessible trough FlightGears menu bar:

Turn this to 0.0 to disable just the ground shaking effect.

The effect system is tuneable trough properties and comes with a default aircraft setting suitable for GA airplanes like the C172. It is always in effect unless the aircraft developer actively disables the default settings. Most Aircraft should be able to just use and tune the default implementation properties however.

Adjustments reside in /sim/rendering/headshake/groundshake and can be done with this properties:

The effect code is located in the FGData file Aircraft/Generic/g-forces.xml with some further comments relevant for developers.