Cincinnati/Northern Kentucky International Airport (often abreviated to as CVG or KCVG) is a fully modled airport located Northern Kentucky, and serves Cincinnati, Ohio. The airport is hub for Delta Air Lines and previously for now defunct Comair. The airport also is a focus city for Allegiant Air and Frontier Airlines. It is a major cargo hub for DHL, which is modeled in the south airfield. 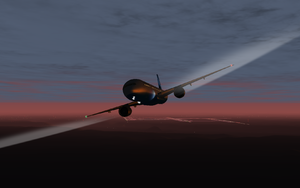 CVG has four runways. Three of the runways are positioned parallel to each other in a north-south direction, allowing triple simultaneous arrivals or deprtures.

The airport currently has three terminals, and the third of which, has three concourses. Terminal 1 has 8 gates, while Terminal 2 has 9 gates. Both terminals have lights for nightstand use, but do not have jetways. In Terminal 3, Concourse A currently does not have jetbridges or lights, but is designed for medium sized aircraft. Concourse B has functioning jetways along with lights, and has room for large aircraft such as the B777, B747, and A380. Concourse C has lights, but passenger board from the tarmac and thus does not have jetway. The concourse only has room small regional jets.

The AI Aircraft are correct for the airport, however the groundnet file is not at the correct coordinated for gates. If someone is able to, please implement the gates listed on the talk page into the official groundnet file.