Originally a single runway in the middle of the ocean in the default FlightGear terrain, it has now been developed at a high level of detail and realism by Horacio, who has modeled the main terminal (shaped like a "T"), the ATC tower and main hangars surrounding the airport. A second step is to complete the rest of buildings present on the island. The terminal and main buildings have been animated with night textures, which complemented with lights and default 3D airplane models taken from FG package, give the airport a very realistic and fantastic night impression. 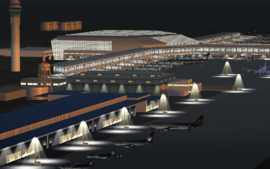 The main windows have been treated using real pictures to get a photorealistic effect of glass reflection, which gives the model a new approach to 3D graphics in FlightGear development that points to precise and meticulous work to improve the simulation experience and realism in the models used, both aircraft and buildings. With the exception of the photographs used as an effect, all textures have been developed in a sole and exclusive work from scratch, adding bevels, shadows, lights, noise, color equalization and many other effects to get realism in each textures used.

The island terrain and surrounding coastline have been developed in an accordingly highly detailed level by Gijs to complete the necesary elements to provide a great new airport for FlightGear, containing all internal roads and railways, which leaves the way open for future works on bridge, parking and other details of vehicular transport to and from the island.

Details of development and future updates can be followed on the forum topic. The airport models and terrain are available for download from Horacio's hangar, and later available on FG model database.