Note: To fly this tutorial, it is necessary to have the scenery for Los Angeles installed. It is not included with the base package and MUST be downloaded and installed., preferably by TerraSync.

Chat and post notices here at my forum boards

We start with flight planning. The first thing we have to plan is which Standard Instrument Departure (SID) route we need to fly and which standard high altitude route we are going to follow. For now we need to get up and level at 300-320 knots around 15000-20000 ft and follow the VOR (and VORTAC) beacons as specified in this tutorial. 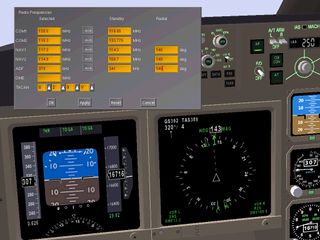 The Automatic Direction Finder uses a transmitter and aerial on the ground , an NDB (Non Directional Beacon) that allows the ADF instrument to point to the aerial that is tuned at a specified frequency . So, no matter what direction you are travelling in , the main part of the needle points to the Actual Radio Aerial Position .

In the RMI (Radio Magnetic Indicator) we can select a plain ADF frequency or the more information rich VOR signal, which is similar but has more information. It also points directly to the antenna but can also be set to indicate a bearing from the antenna called a RADIAL

If you have the needle is pointing at twelve o' clock or straight forward , toward your selected VOR ( VOR = VHF (very high frequency) Omnidirectional Range-finder )you can press F12 and enter your current heading plus or minus 180, in the Radial Box Input on the Nav 1 line . You can also plot a Radial using a Sectional , En-Route or Terminal Area Chart (TAC).

The current setting in that input box should read 280 , change that to the heading you are on when the needle is pointing forward ie 12 O' Clock plus or minus 180 degrees . Again ! A radial is the direction in degrees FROM the actual VOR antenna or if you prefer , Aerial Mast .

(On the Green Needle there is often "middle" portion that moves from side to side , which tells you , how close , or far away , you are from your Desired Course . This part of the needle is called the CDI (Course Deviation Indicator)...if you are not too badly off course you can steer AWAY or to the opposite side indicated , to bring it to the center this will indicate you are On The Radial , you have selected .

Head out and get onto your desired course and turn the inner part of the HDG dial to that course. The outer part of the dial sets the maximum bank angle and is not vital to use at this stage. Once you have set the dial to your desired course click the heading button. It should light up yellow indicating that it is now engaged . This will steer the plane but will not maintain altitude or speed. Do not engage Auto-throttle! Rather, when you have leveled out a bit click the VS button (this will maintain your current rate of climb and decent) so as soon as you click VS immediately set the VS dial to zero and then experiment with positive or negative rates of climb. Note, even if you set the VS dial to zero BEFORE your click the VS button, it will still use your current climb or descent rate when you activate it, so be ready to scramble to set it to zero when you click it. If you try to use VS make sure you are flying reasonably level, it has caught me a few times. You can change your heading and climb/descent rate while the buttons are engaged which makes it possible to tweak your flight. At this stage it is preferable to operate the throttle manually although you can experiment with the SPD controls. Remember that using VS (vertical speed) will require you to watch the throttle setting and airspeed VERY CAREFULLY! Again VS does not set the throttle so using the VS feature will require you to add or subtract throttle as required to maintain the desired airspeed!

Assuming you are in the air and above 3,000 feet, get the 777 roughly on course and to cruise speed. Now set the heading dial on the Autopilot to your heading (the inside part of the dial) of say 150 and press the hold key (it should light or yellow) now set the altitude to 19,500 ft using the altitude dial and press the ALT button. You can change the settings while you have these functions engaged so instead of de-activating them to make adjustments you simply set the desired course and altitude while they are engaged. Note please read the FlightGear Autopilot wiki carefully to more fully understand the Auto pilot There are many things you need to know.

Let's now set nav 2 (be sure to switch both nav toggle switches on the panel and set nav 2 to 114.3, when you are approx 20 -30 DME away from Salinas steer onto the nav 2 needle to 12 o'clock i.e. pointing straight ahead and set nav 1 to our next beacon, make sure you remember which needle is for nav1 and which is for nav 2, nav 2 is the " Double Bladed One " 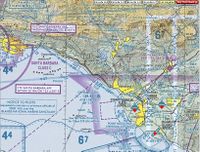 30 nautical milex from Santa Monica Beacon bring the aircraft down gently (no more than 150 ft per min) to 8000 ft and level out at 250 knots. Do not use speedbrakes.

Now do a visual check , as you come into the bay area over the water, KLAX is close so stay 12DME out to sea, and descend to 3000 ft The Runway Localiser(ILS)... and Inner and Outer marker Information 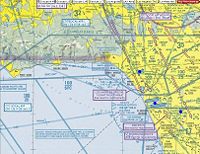 This is the Air chart showing the airport

Your first all instrument approach will be to runway 6L, which is the second of 4 main runways as seen from left to right in your current approach . ILS (Instrument Landing System, which is a special type of radio beacon for landing ) or 'Localizer'. Now set nav 1 to 108.5(the localizer beacon) set nav 2 to KLAX VOR 113.6 (note you must be under 3000 ft for the vertical guidance or Glide slope portion to Intercept its signal so lining your approach using the ILS is vital. (We will tackle this in our next flight from Boston to New York). The localizer gives you traditional VOR guidance from up to 20 DME away and vertical "glideslope guidance" 8 DME and under 3000 ft directly in front of the runway. (Note the VOR CDI green needle will not point to the correct heading of your runway when close by or on approach as it it not situated on the runway. Establish the exact magnetic and true headings for your runway and set your heading bug in the F11 autopilot menu. You can obtain all the information you need from airnav.com. I have also included the headings you need in the next section.

Set nav1 to the localizer for runway 6L (left) (that's the 2nd left-most runway visible from out at sea, maintaining your heading until the needle is at 10 o'clock (i.e. pointing left ). Now turn the aircraft into the needle so it points forward or upright again. You should be on a heading of approx. 69 degrees magnetic where you need to be as it is the EXACT direction of the runway (069 in the heading bug ) to make sure you can land. You should plot a position PAST the Oxnard VOR, out into the bay area and then at the right moment turn left onto the runway heading of 69 degrees, this is called your Final Approach Fix (FAF). Do this using a chart if you intend trying this in anything other than perfect visual conditions.

To land correctly you should use a chart to plot a series of WAYPOINTS ( markers on the map) that are created by you or others to designate course arrival points, using a GPS systenm and charts, or using radial "crosschecks" to FIX a point in space that you should fly to. The last of these is the exact point at which the 777 should be on 69 degrees magnetic (i.e. your compass heading). Magnetic headings also vary so an Isogonic Variation Chart must also be plotted if flying only by compass. Pilots mostly use Pre-Planned Routes and GPS systems. Navigation is changing with technology, but using radio systems, VOR Beacons and the like to navigate is required knowledge for the 'real 777 Jockey !

At the bottom of the left flightscreen (Primus 1000 EFIS) there are white markers and another white indicator will appear. If this indicator is in the centre of the markers , there are two sets , one for heading into runway and the other(verical white ticks on the right of the left screen) for pitch or "glideslope" these scales and their markers should always be Dead Center. If they are you are bang on line for your runway , this only happens if you are in the radio CONE between 3 and 10 degrees of your heading and glide slope information only occurs at UNDER 2500 ft practice makes perfect . In real life an IFR (Instrument Flight Rules) landing will require SID , TAC , RUNWAY , SECTIONAL , EN ROUTE , Approach Plates and NOTAMS Notices to Airman) that the pilot must obtain . You can obtain most of these free on the Web .

NEVER do an instrument approach with the nose of the 777 pointing down more than 3-5 degrees or you may crash ! Your descent and heading into any runway must be carefully planned ! The weather ALWAYS PLAYS A CRUCIAL ROLE !

Head for Runway 6 Left and land as usual. Remember ! Runway Numbers are reciprocal , 180 degrees , so runways are marked with their Approximate Headings , typically numbered as such , the zero's in brackets serve as illustration only