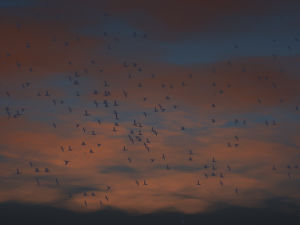 mass generation of birds. They actually flap wings and appear to go forward, though if you look closely, the swarm goes nowhere.

Thorsten came up with a toy for mass generation of birds. They actually flap wings and appear to go forward, though if you look closely, the swarm goes nowhere.[1]

the main guidance principle for this effect has been that it has to be cheap because the vast majority of users will see it for a few seconds flying past. It's entirely unsuitable for things like following a migratory swarm with an ultralight. You get to see something that looks like birds in the scene - that's basically it.[2]

Birds are largely unpredictable which makes true simulation impossible anyhow. You could follow a group migrating birds but they don't fly indefinitely so now you would have to account for breaks and proper landing areas. Which is infeasible.[3]

to see birds, you technically need to:

(Just south-west of Barcelona airport at the river delta is a good place - but it's of course the whole landclass). They're low - some 100-200 m above ground. They're difficult to spot against bright background, but in the morning hours usually appear bright against the dark ocean. And they're small - so you need to get close to resolve them as birds, from the distance they look like dancing sparks or so.[4]