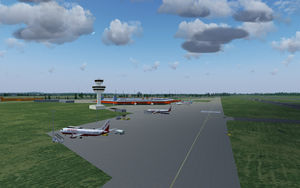 The main apron with the tower and terminal building

Berlin Tegel is one of Berlin's two main airports. With almost 25 million passengers in 2019, it is the larger one of the two.
In FlightGear, the airport is modelled with both static and shared objects.

Originally, the area today used as Berlin Tegel airport was used for airships, called the Luftschiffhafen Reinickendorf. During the Nazi regime, it was used as a testspace for rockets. After the second world war, Berlin Tegel started to be used for commercial aviation, becoming Berlin's largest airport. In the future, it is considered to shut down Tegel for commercial air traffic in favor of the new Berlin-Brandenburg airport located at the current airport Berlin-Schönefeld.

The airport has five terminals, Terminal A-E, even though those are significantly smaller compared to other airport's terminals. Also, it is used as a hub for both Lufthansa's Eurowings company as well as Easyjet.