Want an engine or instrument to fail mid-flight? Flightgear has such a system, but not every aircraft supports it fully. The failure system is disabled by default, the system can be accessed in Flightgear in the Equipment menu.

Should you for example wish to fail an instrument, you can open the Instrument failure panel as seen below. 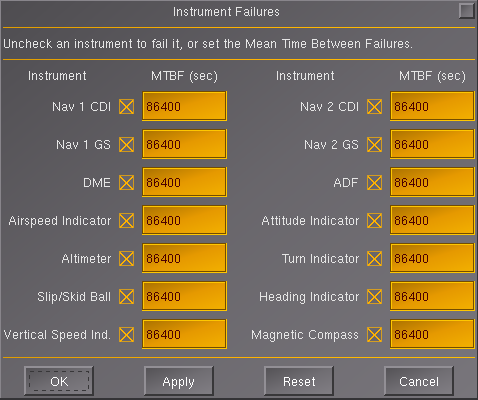 A checked field means that the instrument has not failed. To fail it, simply uncheck it, and click apply. If the aircraft suports it, it will fail immidiatly.

For each instrument, there is also a MTBF (Mean time between failures), where you can specify the how often an instrument should fail. MTBF is in seconds.

To make the instrument work again, simply open the panel, check it, and click apply.

Systems works in the same way as instruments, but some components have a MCBF (Mean cyclus between failures) field, instead of a MTBF. A cycle is each time the system is changed into the other direction. E.g. for flaps each time it is moved in or out, opposite of last movement counts for a cycle: 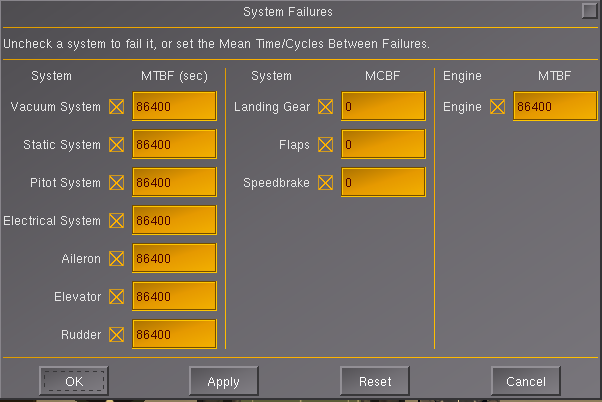 The random failure manager is a convenient way to enter the same MTBF/MCBF for all systems/instruments. 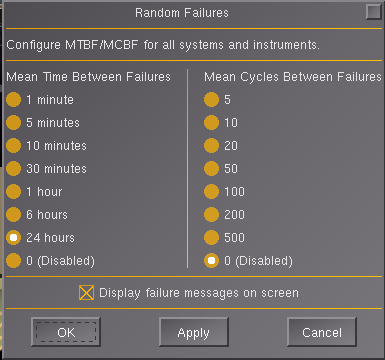 If you want a red message on the screen to tell when it fails, the click the checkbox for that.

Adapting an aircraft to fail

Some things will work pretty much out of the box. For example engine and control surfaces. Some control surfaces like elevons, spoilers and instruments like CDU you have to either find a matchable serviceable property and make the object depend on it or make your own.

They are either true or false.

Some things depend on more serviceables, for example airspeed indicator can fail on its own, or the electrical system can fail on which it depend.

For some systems/instruments, when it becomes unserviceable, some properties will also become read-only. For example the rudder will get 'stuck'. Some elements of Flightgear give some Alerts in the console, when the try to change a property and cannot. For example JSBSim will output an error when trying to change the rudder position after it failed, when you try to yaw the plane. Most of these messages can be ignored.

At the moment the panels for failure cannot be extended with custom elements, but you can write in NASAL your own code on when/how to fail a system.

Make a serviceable property where you have other properties for that system. And then write some script/xml to make the system depend on that property.

Examples of what you could make a custom failure for:

With Nasal the random failure manager can be extended with additional failures, but until Flightgear 3.4 they will not show up in the GUI panels.

Notice the failure system has been changed for Flightgear 3.2, even though the GUI has not changed yet (scheduled for Flightgear 3.4). The new system will allow components to fail at various levels instead of only 0% or 100% failed. It is also more flexible and easier to extend and modify.

Example of adding Canvas HUD, Canopy and Instrumentation lights to the list of systems that might fail:

For example for canopy it will make a property called:

In the above code its MTBF is set to 24 hours, but this can be changed in the Random Failure panel.