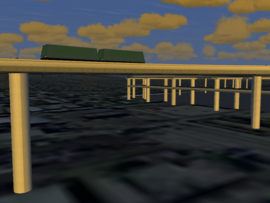 The AirTrain at KSFO. 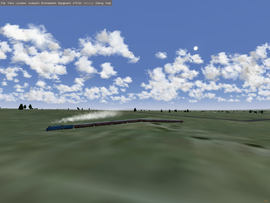 Groundvehicles can be anything, from trains to busses to cars.

The in this article shown examples are based on the SFO AirTrain scenario, included in FlightGear 2.0.0 and later.

Create a .xml file for your model, preferably in $FG ROOT/Models/Transport/. The minimum required content will be similar to:

Altough our vehicles are groundbased, they need a flightplan (= route). Flightplans are saved in the $FG ROOT/AI/FlightPlans/ directory.

It is advised to cut the route into several sections. This will ease the bugtracking, as FlightGear does not tell you what line to look if an error occurs.

There are a couple of special waypoints.

The following will stop the train, which is useful at stations to (un)board passengers/load:

All waypoints within the tunnel (so including the ones in front of the tunnel waypoint) should have on-ground set to false and an altitude specified.

If your entire route can be considered as a "tunnel" you can also set <tunnel>true</tunnel> in the scenario.

Every route should end in a END-waypoint. When this waypoint is reached, the train will be removed or set back to the starting point (we will define this in the scenario file).

Close the file with:

Create a .xml file in FlightGear's $FG ROOT/AI/ directory. This is the main file of the scenario, as FlightGear will look into it to see what else to load.

The first lines of the file are general:

Close the file with: