The A-10 Thunderbolt II

The A-10 Thunderbolt II, better known as the "Warthog", is a fixed-wing attack aircraft designed by Fairchild Republic and is operated exclusively by the U.S. Air Force (USAF). The aircraft is powered by two General Electric TF34-GE-100A

turbofans delivering 9,065 lbf (40.32 kN) each. The A-10 is straight-winged, with a wingspan of 17.53 meters. It can carry a wide variety of ordnance and payload, but is better known for its 30 mm rotary cannon affixed off-center in the nose. It has the only USAF aircraft ever designed solely for close support roles, and has proved itself on the battlefield as the ultimate ground support aircraft. The A-10 has 11 (8× under-wing and 3× under-fuselage pylon stations) with a capacity of 16,000 lb (7,260 kg) and the capability to carry the following payload:

The A-10A will be the variant discussed here because that is the variant simulated in FlightGear.

The A-10 has the tendency to lose center of gravity (COG) when the pitch is at its extremes. The aircraft cannot pull out of a harsh dive easily, nor can it climb quickly. At a level pitch of 0, maintaining 330 knots (kt), the pilot cannot simply pull back and hope to loop completely. The aircraft will stall at 120 kt and will continue to lose airspeed unless it is put into a dive to regain such. Once over 130 kt is reached, the dive must be leveled out, but the A-10 is slow to react in these situations. A full loop is not advised unless you have over 350 kt of airspeed to start with and all control surfaces are level—this includes flaps, spoilers, etc.

A snap roll is not an issue if the aircraft is lightly loaded and has reasonable speed. A minimum of 150 kt is required for a very quick snap roll. A slow roll requires level pitch and constant adjustments to keep it so, as well as an airspeed of 200 KIAS for a guaranteed safe roll. The A-10’s aileron systems are quick to react but if combined with faulty elevator levels it can be fatal.

The engines, once spooled to full military power, are relentless in their ability to pull the A-10 from the ground into the air. They are large and positioned out of the aerodynamic center (ADC), thus aiding in preventing excessive pitch moment (PIM).

Fuel is a constant worry. As it is burned the aircraft will regain its ability to perform maneuvers previously unreachable. Rolls and loops are now an option; however, it is necessary to maintain a throttle below the highest level—otherwise, the fuel consumption will be too high.

The ordnance available in FlightGear is limited, and the best setup for ground attack is as follows (see the picture): 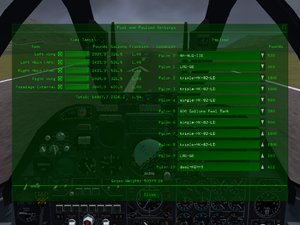 Notice the gross weight. This is your MTOW, or Maximum Take-Off Weight