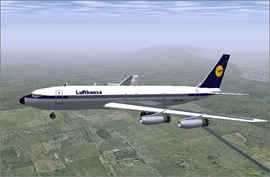 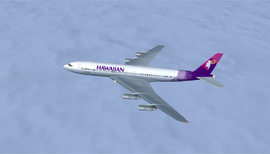 The Boeing 707 is a four-engine commercial passenger jet airliner developed by Boeing in the early 1950s. Its name is most commonly spoken as "Seven Oh Seven". Boeing delivered a total of 1010 Boeing 707s, which dominated passenger air transport in the 1960s and remained common through the 1970s. Boeing also offered a smaller, faster version of the aircraft that was marketed as the Boeing 720.

Although it was not the first commercial jet in service, the 707 was among the first to be commercially successful, and is generally credited as ushering in the Jet Age. It established Boeing as one of the largest makers of passenger aircraft, and led to the later series of aircraft with "7x7" designations.

Currently there are 6 variants available in FlightGear: