Howto:Work with AC3D files in Blender

Many FlightGear aircraft modellers prefer Blender as their 3D-modelling editor. Blender is a powerful, robust and open-source 3D modelling suite. FlightGear primarily uses the AC3D file format (.ac) to model aircraft, scenery models, and many other things. With the AC3D file format first released in 1996[1], modern versions of Blender do not bother maintaining support for the format. However, add-ons exist to extend Blender's functionality in order to allow the import and export of these files.

The prominent add-on for using AC3D files in Blender is called Blender-AC3D. It has been forked from its original to provide support for Blender 2.8.

You can report bugs with the addon here, but please include problematic .ac/.blend files and their textures.

Once the add-on is installed, AC3D models can be imported in the same manner as any other model foramat into Blender by using the File > Import > AC3D (.ac) dialog. 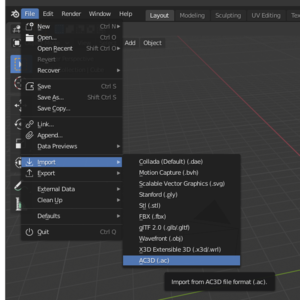 This figure demonstrates how to import an AC3D model in Blender using a third-party addon.
Retrieved from "http://wiki.flightgear.org/index.php?title=Howto:Work_with_AC3D_files_in_Blender&oldid=127288"
Category: