The Shuttle Landing Facility (ICAO: KTTS, FAA LID: TTS) is a private airport located on Merritt Island in Brevard County, Florida, owned and operated by NASA (National Aeronautics and Space Administration) for landing the Space Shuttles. Most space shuttle landings are on Runway 33. 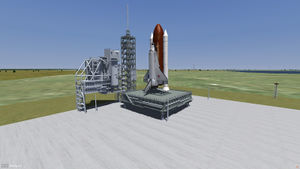 The Shuttle Landing Facility covers 500 acres (200 ha) and has a single runway, 15/33. It is one of the longest runways in the world, at 4,572 m (15,000 ft), and is 91.4 meters (300 ft) wide. The runway surface consists of an extremely high-friction concrete strip designed to maximize the braking ability of the Space Shuttle at its high landing speed. The runway was first used by a space shuttle on 11 February 1984, when the STS-41-B mission returned to Earth. This also marked the first-ever landing of a spacecraft at its launch site. Prior to this, all shuttle landings were performed at Edwards Air Force Base in California while the landing facility continued testing and shuttle crews developed landing skills at Edwards AFB, where the margin for error is much greater than SLF.