It can fly an entire route on one engine. It can carry over 350 passengers for about 9,000 miles. And this gargantuan monster, with a wingspan of nearly 200 feet and a weight of over 300,000 pounds, is operated on fly-by-wire technology. It's the legend of airliners, as in FlightGear. It's the Boeing 777-200ER.

So you've just sat down in the cockpit of this very complex aircraft. With a cockpit and instruments that were given a makeover in version 2.0, it's no surprise to see why you might be a bit overwhelmed. Today, that changes as you take to the skies, as the captain of the Triple 7.

The 777 is one of FlightGear's most ready-to-fly aircraft. You should start out with a good amount of fuel in your tanks, but to be certain, check it in your Equipment-Fuel and Payload box. Add or decrease fuel by dragging each indicator to the desired amount. Since there's a tank in the center and a tank on each wing, you should try and make it balanced; the amount of fuel in the center tank can be anything you want, but try to make the fuel in each wing equal.

'IMPORTANT: There is some debate as to whether or not restarting/repositioning messes up the 777 ILS. Make sure that this your initial' start from the wizard; not a restart or reposition. Just the first flight in FGFS since you clicked "run" on the wizard.

You can also adjust the amount of passengers (PAX) and crew.

Once you've got your desired load, click on the "777" menu on the top of the screen. You should see an "autostart" pop up. Click on that, and the aircraft will come to life! Now, all we've got to do is set our instruments.

If you wish to start up manually, here is a simple checklist:

Whether you're new to the triple 7 or confused about some new 2.0 stuff, the 777 Autopilot might seem a bit confusing. But there's one thing to remember: half of it you will never use. When navigating to an airport, there's really only two parts of the AP: using waypoints to get to the approach for a runway, and then using a localizer, or runway frequency, for your final approach (most localizers only extend for about 20 miles, meaning the waypoints are neccessary).

Before you do anything involving AP, you must first get the neccessary data for it. airnav.comis a great place to get it; simply go to the "airports" tab and type in the airport code. So, for example, if you typed in "KSFO", you should get a whole page on it. Scroll down to the bottom where there's a bunch of PDFs labelled "IAPs- Instrument Approach procedures". Decide on the runway you are going to use, but note that only certain runways are equipped with ILS; at KSFO, it's really only 28R/28L/ and 19L. Under IAPs, look for the "ILS OR LOC RWY __" or something like that, with the desired runway number in it. ONLY use the IAPs with "ILS/LOC" or "ILS RWY". In other words, use the ones at the tippy top.

Click "download" on the IAP you want to use. I'm going to use "ILS OR LOC RWY 19L **CHANGED**", for 19L at KSFO. You should see a chart, but it may be hard to distinguish the waypoints. So scroll to the bottom where you basically see a narrowing arrow with three waypoints. The ones with "int" mean intercept, so don't include the "INT". The three waypoints in this case, in order, are "BERKS INT", "SHAKE INT", and "ROGGE INT". So, you really only the first one "BERKS" to get within range of the localizer. For the localizer, you should see a box that says "LOCALIZER- 108.9, ISIA". The ISIA is the identifier you should get on your NAV display. So write those two down- "BERKS" and "108.9, ISIA".

Now, head on back to FlightGear and back to your cockpit. First, let's take a look at the Route manager: (under Autopilot-Route Manager): 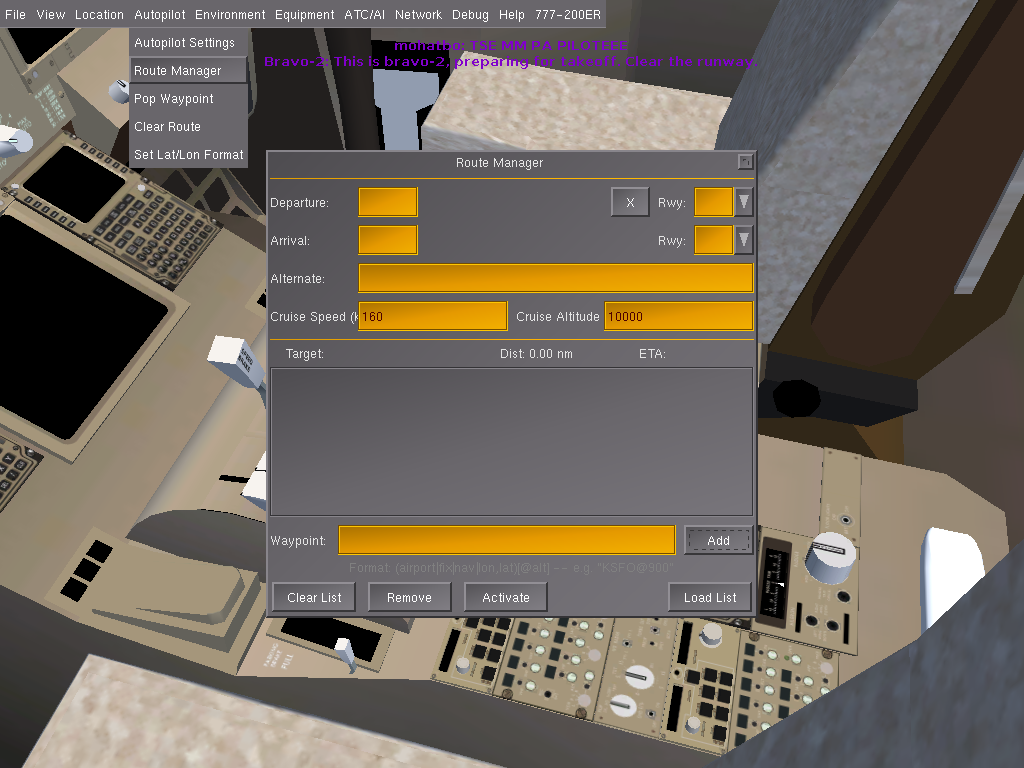 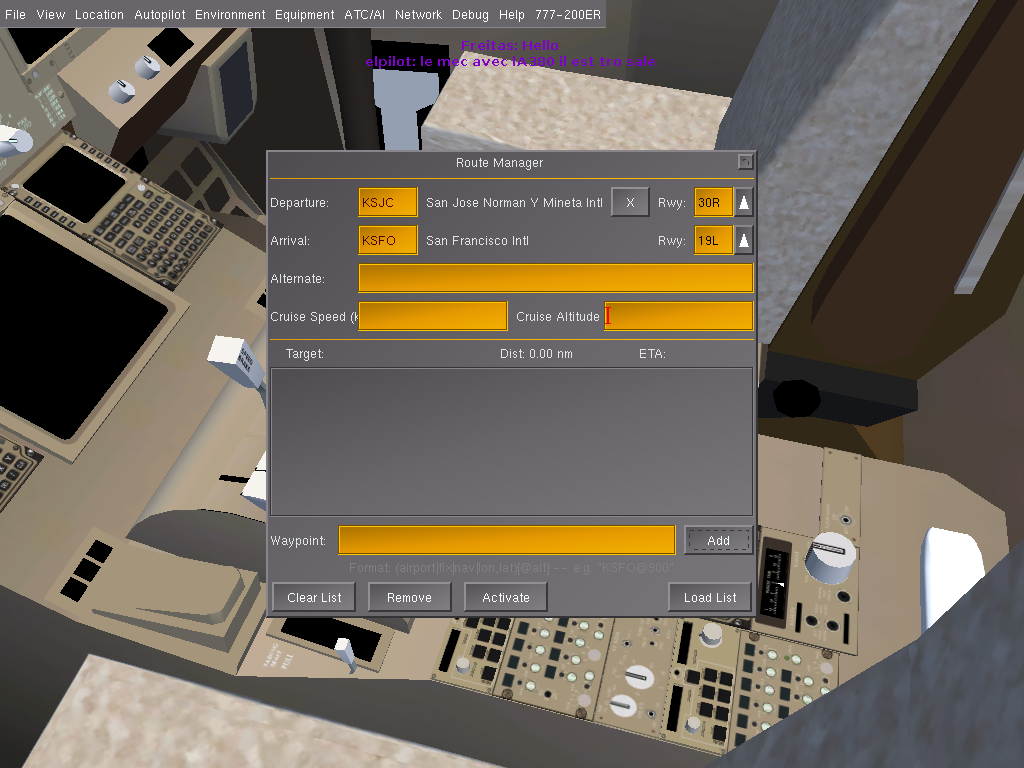 Now it's time to add in "BERKS". We type "BERKS" into the "add waypoint" box and click Add Waypoint. Then, delete the 0s in the Altitude/speed box" and click activate, and it should look like this: 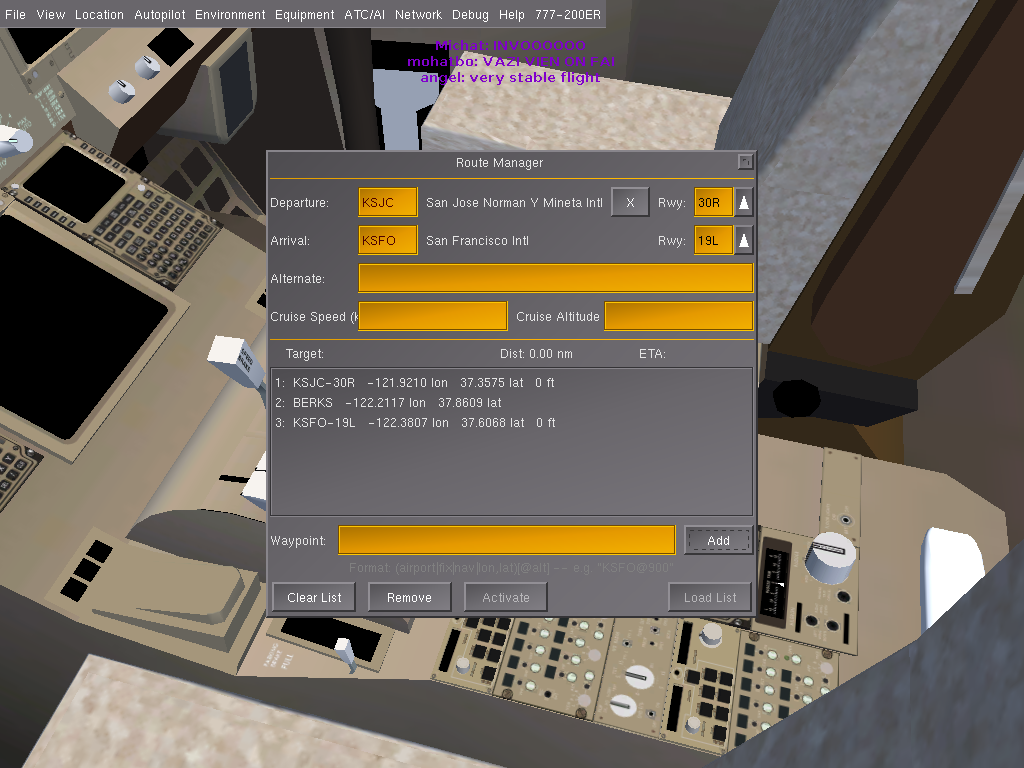 Now, go to your autopilot. To engage the route manager, the function is "LNAV".

TO REPEAT: There is some controversy over whether resetting/repositioning the 777 locks up the AP into one mode (it does for me), so make sure this is your initial startup!

Now, let's get your localizer ready. When you get within a certain number of miles (generally at least 30), you'll capture the beacon for a certain runway. Head to your Radio Settings (or press F12). See the NAV1 box? There should be a "standby" box open for editing. Put the runway frequency-in this case, 108,9-, and then click the little arrow that switches it from standby to active. Then click apply.

We're almost done with this! All you've got to do now is zoom in on the cockpit buttons above your NAV display (the giant compass thing with a bar in the center). There should be one little 3-position switch that has the words NAV1 and ADF1 on the top and bottom. Click upwards to NAV1. Then, find the knob that has the words "MAP", "VOR", etc...and turn it to VOR. You should now have a little purple needle that is solid (click in the center to toggle different modes of the VOR).

Taking off is pretty straightforward. If you're stuck facing a gate/building open the 777 menu and press Pushback. Set it up and remove parking brake. You will move back, and use the rudder to turn, and then taxi to the runway. Ask for permission if online, if not taxi onto runway, set 20 flaps, and then put full power, and lift nose at about 150 knots. Press AP and AT to engage Autopilot, and press LNAV and set up VS, then you're good to go.