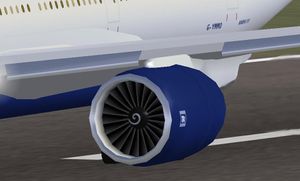 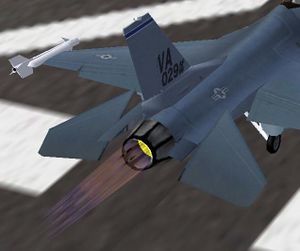 Afterburner on the tail of a F16 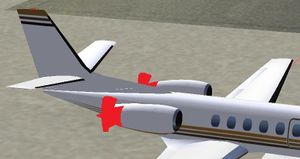 Thrus reverser (red) on the tail of a Cessna Citation Bravo 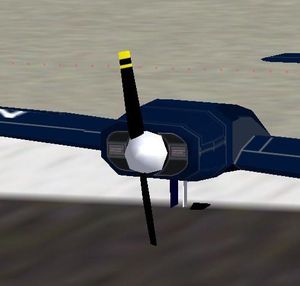 Propeller on the wing of a Cessna C310

An aircraft engine (know as the powerplant) is a propulsion system for an aircraft. Aircraft engines are almost always either lightweight piston engines or gas turbines. This article is an overview of the basic types of aircraft engines and the design concepts employed in engine development for aircraft.

A reciprocating engine, also often known as a piston engine, is a heat engine that uses one or more reciprocating pistons to convert pressure into a rotating motion. This article describes the common features of all types. The main types are: the internal combustion engine, used extensively in motor vehicles; the steam engine, the mainstay of the Industrial Revolution; and the niche application Stirling engine.

While military fighters require very high speeds, many civil airplanes do not. Yet, civil aircraft designers wanted to benefit from the high power and low maintenance that a gas turbine engine offered. Thus was born the idea to mate a turbine engine to a traditional propeller. Because gas turbines optimally spin at high speed, a turboprop features a gearbox to lower the speed of the shaft so that the propeller tips don't reach supersonic speeds. Often the turbines which drive the propeller are separate from the rest of the rotating components so that they are free to rotate at their own best speed (referred to as a free-turbine engine). A turboprop is very efficient when operated within the realm of cruise speeds it was designed for, which is typically 200 to 400 mph (640 km/h).

A turbojet is a type of gas turbine engine that was originally developed for military fighters during World War II. A turbojet is the simplest of all aircraft gas turbines. It features a compressor to draw air in and compress it, a combustion section which adds fuel and ignites it, one or more turbines that extract power from the expanding exhaust gases to drive the compressor, and an exhaust nozzle which accelerates the exhaust out the back of the engine to create thrust. When turbojets were introduced, the top speed of fighter aircraft equipped with them was at least 100 miles per hour faster than competing piston-driven aircraft. The relative simplicity of turbojet designs lent themselves to massive wartime production, but the war ended before any turbojets could be mass-produced. In the years after the war, the drawbacks of the turbojet gradually became apparent. Below about Mach 2, turbojets are very fuel inefficient and create tremendous amounts of noise. The early designs also respond very slowly to power changes, a fact which killed many experienced pilots when they attempted to transition to jets. These drawbacks eventually led to the downfall of the pure turbojet, and only a handful of types are still in production. The last airliner that used turbojets was the Concorde, whose Mach 2 flight crossed the threshold into efficient turbojet operation.

A turbofan is a type of jet engine, similar to a turbojet. It essentially consists of a ducted fan with a smaller diameter turbojet engine mounted behind it that powers the fan. Part of the airstream from the ducted fan passes through the turbojet where it is burnt to power the fan, but the majority of the flow bypasses it, and very often produces most of the thrust.

An afterburner is an additional component added to some jet engines, primarily those on supersonic aircraft. Its purpose is to provide a temporary increase in thrust, both for supersonic flight and for takeoff (as the high wing loading typical of supersonic aircraft designs means that take-off speed is very high). On military aircraft the extra thrust is also useful for combat situations. This is achieved by injecting additional fuel into the jet pipe downstream of (i.e. after) the turbine. This fuel is ignited by the hot exhaust gases and adds greatly to the thrust of the engine. The advantage of afterburning is significantly increased thrust; the disadvantage of afterburning is its very high fuel consumption and inefficiency but this is acceptable for the short periods in which it is usually used.

Thrust reversal, also called reverse thrust, is the temporary diversion of an aircraft engine's output so that the thrust produced is directed forward, rather than aft. This acts against the forward travel of the aircraft, providing deceleration. Thrust reversers are used by many jet aircraft to help slow down just after touch-down, reducing wear on the brakes and enabling shorter landing distances. It is also available on many propeller aircraft through reversing the controllable pitch propellers to a negative angle.

A propeller is essentially a type of fan which transmits power by converting rotational motion into thrust for propulsion of a vehicle such as an aircraft, ship, or submarine through a fluid such as water or air, by rotating two or more twisted blades about a central shaft, in a manner analogous to rotating a screw through a solid. The blades of a propeller act as rotating wings (the blades of a propeller are in fact wings or airfoils), and produce force through application of both Bernoulli's principle and Newton's third law, generating a difference in pressure between the forward and rear surfaces of the airfoil-shaped blades and by accelerating a mass of air rearward.