The Head-up display (HUD) is an important instrument in modern, mostly military, cockpits. FlightGear provides a XML-based system to relatively easily create HUDs for aircrafts such as the F-14 and F-16.

However, this article's focus is on FlightGear's default head-up displays. Those are available for any craft which does not include its own set. Have a look at #Further Information if you're planning to create a HUD.

Activate the HUD with the [h]-key. Pressing it repeatedly moves through the configured colours and turns it off again. To change the brightness, press [shift]+[h]. Press [shift]+[i] to go through the available HUD's. Press [i] to switch back to the first one at any time. Have in mind that some aircraft do assign one or more of those keys differently and therefore one or more function/s is/are missing on them.

Some of the head-up display's options can be altered in the menu: View --> Adjust HUD Properties 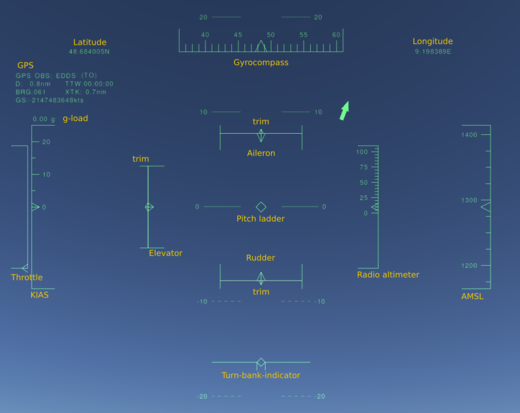 g-load
The g-force appealing to the pilot - to avoid black-/redout.
Property: /accelerations/pilot/z-accel-fps_sec with factor -0.03108095

Gyrocompass
This is an ideal version of a gyrocompass without the drawbacks of a real one. It shows heading of the aircraft relative to the geographical North Pole (true north) in degree (360 degree scale).
Property: /orientation/heading-deg

Latitude / Longitude
Current location according to the geographic coordinate system.
To change the format of the displayed coordinates, go to Autopilot --> Set Lat/Lon-format.
Properties: /position/latitude-string and /position/longitude-string

Pitch ladder
Displays the aircraft's pitch and roll relative to the ground's level/horizontal in degree. It's used as an artificial horizon (Attitude indicator).
Properties: /orientation/roll-deg and /orientation/pitch-deg

Radio altimeter
Shows current altitude above ground level (AGL) in feet. Relating to the location of the aircraft's radio altimeter, it's not zero if the aircraft is on the ground.
Property: /position/altitude-agl-ft

The setup of the default HUD is defined at $FG_ROOT/Huds/default.xml.

Documentation can be found at $FG_ROOT/Docs/README.hud.

HeliHUD
Designed to fly helicopters in Helicopter View it is also handy for any craft with a not yet finished cockpit. It also contains a minimalistic HUD only showing some navigation informations such as compass and GPS. The download contains instructions and specs.